Filmmaker Denis Villeneuve's Dune, which had its official world premiere at the Venice Film Festival recently, had the Sala Grande as it gave the adaptation of Frank Herbert's 1965 sci-fi classic an eight-minute standing ovation. Dune rolls out in cinemas in Europe starting September 15 and in the US in theatres and on HBO Max on October 22. 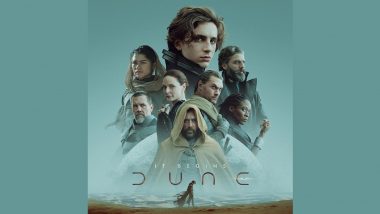 Timothée Chalamet has proved his merit with the range of films he has worked on. Be it his performance in Call Me By Your Name or his acting chops in Little Women, Chalamet has won the audience's heart every time. The actor will now be seen in Dune next, and along with him also comes a stellar cast including  Rebecca Ferguson, Josh Brolin, Zendaya, Oscar Isaac, Jason Mamoa Dave Bautista, Stellan Skarsgård, Stephen McKinley Henderson and Chang Chen. The film has managed to highly impress the critics who are in love with the performances of the actors and the story of Dune. Dune: Timothée Chalamet’s Film Receives Eight-Minute Standing Ovation During World Premiere at Venice Film Festival.

The Guardian: "Dune reminds us what a Hollywood blockbuster can be. Implicitly, its message is written again and again in the sand, Denis Villeneuve’s fantasy epic tells us that big-budget spectaculars don’t have to be dumb or hyperactive, that it’s possible to allow the odd quiet passage amid the explosions. Dune is dense, moody and quite often sublime – the missing link bridging the multiplex and the arthouse."

Variety: "Dune, a majestically somber and grand-scale sci-fi trance-out, is full of lavish hugger-mugger — clan wars, brute armies, a grotesque autocrat villain, a hero who may be the Messiah — that links it, in spirit and design, to the “Star Wars” and “Lord of the Rings” films, though with a predatory ominousness all its own. Dune is out to wow us, and sometimes succeeds, but it also wants to get under your skin like a hypnotically toxic mosquito. It does…until it doesn’t."

Entertainment Weekly: Dune is so aesthetically rich and monolithic that a few brief, misguided stabs at Marvel-style humor early on feel almost like blasphemy. The script seems to know it and soon settles into a kind of grim grandeur, each turn a building block to nothing less than the interstellar fate of the free world. The sheer awesomeness of Villeneuve's execution — there might not be another film this year, or ever, that turns one character asking another for a glass of water into a kind of walloping psychedelic performance art — often obscures the fact that the plot is mostly prologue: a sprawling origin story with no fixed beginning or end." Denis Villeneuve Criticises Marvel Films, Filmmaker Says ‘They Are Cut and Paste of Others’.

Time Out: "The Canadian filmmaker has nailed it where, in different ways David Lynch, Alejandro Jodorowksy and Ridley Scott all floundered. His Dune is sprawling, spectacular and politically resonant in its critique of colonialism and exploitation. Okay, technically it doesn’t have an ending – it’s ‘Part 1’ of a series that may not get a Part 2 – and not everyone will get along with the levels of patience Villeneuve demands of his audience, but those who do will be rewarded with precise storytelling, visual fireworks and some god-level world-building."

The Wrap: "This version of Dune sometimes feels as if it aims to impress you more than entertain you; it’s grim on a staggering level, ditching most of the fun of sci-fi yarns in favor of a worldview that feels more like Villeneuve’s Sicario or Prisoners than his Arrival. But it’s also a formidable cinematic accomplishment, a giant mood piece that can be exhilarating in its dark beauty."

Filmmaker Denis Villeneuve's Dune, which had its official world premiere at the Venice Film Festival recently, had the Sala Grande as it gave the adaptation of Frank Herbert's 1965 sci-fi classic an eight-minute standing ovation. Dune rolls out in cinemas in Europe starting September 15 and in the US in theatres and on HBO Max on October 22.

(The above story first appeared on LatestLY on Sep 21, 2021 06:48 PM IST. For more news and updates on politics, world, sports, entertainment and lifestyle, log on to our website latestly.com).