Emma Watson Says She Is Self-Partnered and Not Single, Twitter Hails the Actress

Emma Watson has given a new term to the internet to obsess over. 'Self-partnered'. That is what she would rather call herself than be labelled as single. 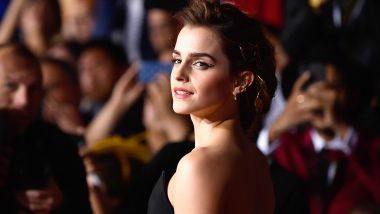 Emma Watson has given a new term to the internet to obsess over. 'Self-partnered'. That is what she would rather call herself than be labelled as single. The Harry Potter actress said so in an interview with British Vogue magazine. Half of the internet is hailing her like a queen, for addressing the pressure put on women to not be single. And the other half, well, the other half is making sure we know which half is the stupid one. Emma was talking about turning 30 in April next year which led to the coinage of 'self-partnered'. Harry Potter Fans are Shipping Hard for Emma Watson and Tom Felton After Their Latest Picture Sends Internet in a Tizzy.

"Why does everyone make such a big fuss about turning 30? This is not a big deal…’” she said. “Cut to 29, and I’m like, ‘Oh my God, I feel so stressed and anxious. And I realise it’s because there is suddenly this bloody influx of subliminal messaging around. If you have not built a home, if you do not have a husband, if you do not have a baby, and you are turning 30, and you’re not in some incredibly secure, stable place in your career, or you’re still figuring things out… There’s just this incredible amount of anxiety.”

“I never believed the whole ‘I’m happy single’ spiel,” she said, adding “I was like, ‘This is totally spiel.’ It took me a long time, but I’m very happy [being single]. I call it being self-partnered.”  Emma Watson Teams Up with Time's Up to Launch Workplace Sexual Harassment Hotline.

Of course, Twitterati found the term to be extremely relatable. Check out some reaction:

Well, That Is Not An Option

I'm self-partenered and secretly wanna break up with her.

And This One Hits The Nail On The Head

Emma Watson: Makes a very valid point about the absurd pressures placed on women with regards to expectations over family/partners and that being single is fine.

So, all you single people out there, no need to succumb to the pressures of the society. Unless that is what you want, which is also absolutely cool. But yea as Emma Watson tried to say, you are self-sufficient and should not worry about not being partnered much.

(The above story first appeared on LatestLY on Nov 06, 2019 01:15 PM IST. For more news and updates on politics, world, sports, entertainment and lifestyle, log on to our website latestly.com).