Priyanka Chopra has teamed up with the master of horror Jason Blum to bring a horror film which has its roots in Indian culture. The movie titled Evil Eye will drop on Amazon Prime on October 13. 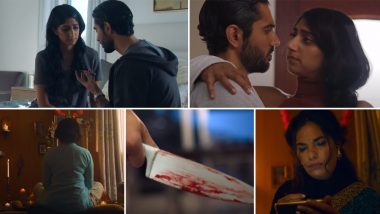 Priyanka Chopra has teamed up with the master of horror Jason Blum to bring a horror film which has its roots in Indian culture. The movie titled Evil Eye will drop on Amazon Prime on October 13. The first trailer for Evil Eye has been released and it is refreshingly intriguing. Firstly, we need to tell you that a movie in the horror genre does not necessarily have to have ghosts. Don't Breathe is a horror movie about being trapped in a house with a killer. Crawl is a horror film about crocodiles. So, Evil Eye doesn't have ghosts, it seems. But a dark mystery is embedded in the plot that's no less than evil. Priyanka Chopra Says 'So Grateful You Were Born' As She Wishes Husband Nick Jonas On His Birthday (View Post).

In Evil Eye, Pallavi (Sunita Mani) introduces her mother Usha (Sarita Choudhury) to her new boyfriend, Sandeep (Omkar Maskati). Usha is reluctant to accept Sandeep which causes a rift between the mother and the daughter. Turns out, Usha is suspicious that somehow an obsessive stalker from her past has returned as Sandip. The movie has its major focus on the Indian superstitions, especial evil eye.

Evil Eye is one of the four films that will be released under the 'Welcome to Blumhouse' project. The horror films are thematically similar. The trailers for all of them were released today. Black Box, Nocturne and The Lie are the other three movies dropping alongside Evil Eye.

This is the first project produced by Priyanka Chopra for Amazon. She has signed a first-look deal with the streamer. She will produce a dance reality show about sangeet ceremonies with her husband Nick Jonas. Also, she will develop and star in Sheela, a movie about Ma Anand Sheela you might know from Wild Wild Country. Priyanka will also headline Russo Brothers' Citadel, a global event series.

(The above story first appeared on LatestLY on Sep 17, 2020 06:33 PM IST. For more news and updates on politics, world, sports, entertainment and lifestyle, log on to our website latestly.com).