From The Crow to The Dark Knight: 5 Horrible Accidents That Have Taken Place on Sets of a Film 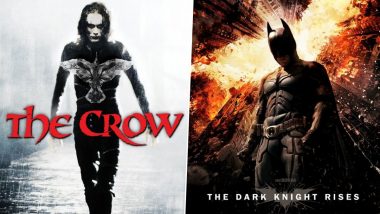 Alec Baldwin is trending on the internet ever since the news of the mishap that took place on the sets of his film Rust. While shooting for the film, the actor fatally fired a prop gun and killed the cinematographer of the film Halyna Hutchins. The director of the film, Joel Souza, too was injured by the prop gun. Social media has been abuzz talking about set safety and how a little carelessness can lead to such horrible incidents. Alec Baldwin Fatally Kills Cinematographer of His Film 'Rust' With a Prop Gun Fire, Injures Director.

While shooting for a crucial scene from the film on a moving stunt car, cameraman Conway Wickliffe lost his life due to negligence. His vehicle missed a 90-degree turn and crashed into a tree, leading to him losing his life.

Scott McLean, who was working as a stuntman for The Hangover Part II, suffered permanent brain and physical injuries on the sets of the franchise film. He was filming a scene that involved moving taxis where he had to lean out of the window. His head collided with another oncoming car resulting in him getting gravely hurt. He even sued Warner Bros. for unspecified damages.

This was possibly the most tragic set accidents ever. Brandon Lee tragically passed in what was likely the most well-shot movie-set accident ever. During the shooting of a scene where Lee's character gets shot, a slug was misplaced, leading to him dying on the sets because of a silly mistake. Alec Baldwin Misfires Prop Gun On Sets Of His Film; Kills Cinematographer Halyna Hutchins And Leaves Director Joel Souza Injured.

If it is a film starring Vin Diesel, we all know that it is going to be action-packed. While shooting for a scene, Vin's stunt double, Harry L. O’Connor, who had to rappel down a line and land on a submarine, lost his life due to an accident. He slammed himself into a bridge at high speed and died on impact. the makers of the film kept the scene in the movie (without the death) to pay tribute to O’Connor’s last work.

Talking about Alec Baldwin's film, Rust is written and directed by Souza and is reportedly set in 1880s Kansas. Baldwin stars as an infamous outlaw who goes on the run with his 13-year-old grandson after the teenager is convicted for the accidental murder of a local rancher and sentenced to hang. The movie also stars Frances Fisher, Jensen Ackles, Brady Noon and Travis Fimmel. In addition to featuring in the film, Baldwin is a co-producer on the upcoming project.

(The above story first appeared on LatestLY on Oct 22, 2021 11:15 AM IST. For more news and updates on politics, world, sports, entertainment and lifestyle, log on to our website latestly.com).