Gigi recently took to Instagram to share a 'smoochin' hot photo with her 'baby daddy' Zayn Malik. Zayn and Gigi were dressed casually and the model laid a hot and rather intimate kiss on her beau. 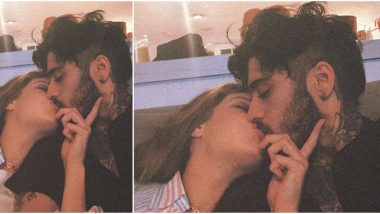 While everyone waits for an update on the birth of model Gigi Hadid’s first baby with former One Direction singer Zayn Malik, the supermodel has been keeping us abreast of other developments in her life like how her New York City apartment is done with renovations. In her last trimester, Gigi has been rather busy. It was recently reported that Gigi, who is set to deliver her baby in September, and Zayn has purchased a home for approximately $5.8 million in New York’s NoHo neighbourhood and had moved it. However, the supermodel recently spent some quality time with Beau Zayn and had a rather cozy treat to share with her admirers. Gigi Hadid Flaunts Her Baby Bump for the First Time in an Instagram Live Session (View Pics).

Gigi recently took to Instagram to share a 'smoochin' hot photo with her 'baby daddy' and not just IG, but we too couldn’t keep calm. Zayn and Gigi were dressed casually and the model laid a hot and rather intimate kiss on Zayn. Zayn Malik's New Tattoo On Love and Marriage Has Fans Speculating His Proposal to Pregnant Girlfriend Gigi Hadid!.

After initially dating on and off, the couple is all set to welcome their first baby. And for those who have been living under a rock, here’s a timeline of Gigi and Zayn’s relationship. They first began dating in November 2015 and parted ways in March 2018. But they reconciled in April the same year, only to part ways in January 2019. However, come January 2020, they were once again said to have patched up and in April 2020, Gigi’s mother confirmed her pregnancy.

(The above story first appeared on LatestLY on Aug 01, 2020 08:15 AM IST. For more news and updates on politics, world, sports, entertainment and lifestyle, log on to our website latestly.com).