Russell Crowe, Christian Bale and Octavia Spencer skip Golden Globes 2020 due to various reasons. Russell could not make it because of Australia fires, while the other two actors were absent because of bad health. 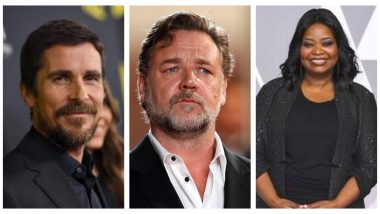 The Golden Globes and The Oscars are probably two award shows that an artist won't miss for the world. But some did skip Golden Globes 2020. Octavia Spencer, Christian Bale and Russell Crowe are amongst prominent names who had to miss out on attending the 77th Golden Globe Awards. Octavia took to her Instagram to announce that she won't be able to make it to the event. The actress was due to present an award this year, but could not attend as she fell ill the last minute.  She posted a picture of her wig on Instagram and wrote, "Well, since she won’t be worn to the #Globes tonight because someone (uh me) is congested, coughing and in full blown sweat mode," Golden Globes 2020: Brian Cox and Kieran Culkin Lock Lips As Former Wins Best Actor in a Television Series For Succession.

Similar was the case for Ford Vs Ferrari actor Christian Bale. He also came down with a flu, as per reports, and had to skip the ceremony. Golden Globes 2020 Red Carpet Pics: Leonardo DiCaprio, Priyanka Chopra, Brad Pitt, Scarlett Johansson and Others Grace the 77th Annual Awards Ceremony.

Well, since she won’t be worn to the #Globes tonight because someone (uh me) is congested, coughing and in full blown sweat 😓 mode....We thought we’d wish all nominees the best time tonight especially first timers!!! #fluseason

Russell Crowe won his second Golden Globe tonight in Best Performance by an Actor in a Limited Series or a Motion Picture Made for Television category. He won the award for The Loudest Voice, the TV series about sexual harassment, but could not be present to pick the award. Russell is a native of Australia and due to the raging bush fires in his country, he couldn't make it to Beverly Hilton.

Jennifer Aniston accepted the award on his behalf and read out a statement by Crowe saying, "make no mistake the tragedy unfolding in Australia is climate change based."

"We need to act based on science, move our global workforce to renewable energy, and respect our planet for the unique and amazing place it is. That way we all have a future. Thank you," Jennifer further said on behalf of Russell.

Late Night actress Emma Thompson was also absent from the show. She was nominated for Best Performance by an Actress in a Motion Picture – Musical or Comedy category. The reason for her absence is not known yet.

(The above story first appeared on LatestLY on Jan 06, 2020 09:04 AM IST. For more news and updates on politics, world, sports, entertainment and lifestyle, log on to our website latestly.com).