Harrison Ford has had a long and acclaimed career which has spanned for more than 50 years. Harrison Ford is one of the biggest action stars of his time and still remains to be a major draw when it comes to films. Ford has starred in some of the most iconic sci-fi and action films of all time. 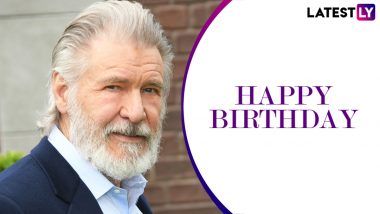 Harrison Ford has had a long and acclaimed career which has spanned for more than 50 years. Harrison Ford is one of the biggest action stars of his time and still remains to be a major draw when it comes to films. Ford has starred in some of the most iconic sci-fi and action films of all time. Ford has even worked with some of the biggest directors in Hollywood as well, George Lucas and Ridley Scott being a few. Harrison Ford Injures Shoulder on Indiana Jones 5 Set While Rehearsing a Fight Scene For the Action Adventure.

So with Harrison Ford’s 79th birthday upon us, we are taking a look at five of his most iconic roles that have defined his career.

Harrison Ford teams up with director Wolfgang Petersen to tell this story about the hijacking of a plane. Ford plays the role of President James Marshall, who attempts a rescue on the hijacked Air Force One. The movie, as patriotic as it is, is mainly remembered for Ford’s iconic performance. It is one film where you can just sit back with a drink and enjoy as Harrison Ford turns it up with a badass performance.

Ford brings the iconic character of Jack Ryan created by author Tom Clancy to screen in Patriot Games. Jack Ryan is arguably one of the late author’s best written characters. Jack Ryan is a skilled CIA operative and Ford plays the role paying the utmost respect to the source material.

When talking about characters you can’t imagine anyone else playing, Indiana Jones is sure to pop up in the conversation. Indy is one of Harrison Ford’s best roles and one that cemented him as a legitimate action star. The match between the character and the actor is so perfect that it almost feels tailor-made. We can’t wait to see Ford don the role for one final time as he is currently shooting the fifth installment in the franchise which is being directed by James Mangold. Indiana Jones 5: Mads Mikkelsen Joins Harrison Ford, Phoebe Waller-Bridge’s Adventure Saga.

Blade Runner, when released back in the ‘80s, changed the sci-fi genre forever. Till this day, it is considered as a landmark for science fiction and that’s all thanks to Ridley Scott’s amazing vision and Harrison Ford as Rick Deckard. Deckard is a Blade Runner who is tasked down with hunting rogue replicants. What makes this role so special is as the film goes on you start to question whether Deckard himself is a replicant or not. It is that one question which surrounds his character with some much mystery and makes his role impactful.

Ford shot to the sky as he portrayed everyone’s favorite nerf herder in George Lucas’s epic space opera. Ford won our hearts as he portrayed the charismatic Han Solo. With Han, Harrison quickly cemented his place in Hollywood and went on to give us a performance for the ages. He would then go on to portray the character four more times, and he brought the same charismatic energy all those times.

(The above story first appeared on LatestLY on Jul 13, 2021 09:11 AM IST. For more news and updates on politics, world, sports, entertainment and lifestyle, log on to our website latestly.com).