Kim will try and keep her distance as much as possible from Kanye. The source also added that Kim is now focused on her future with her kids which obviously means no Kanye in their lives. 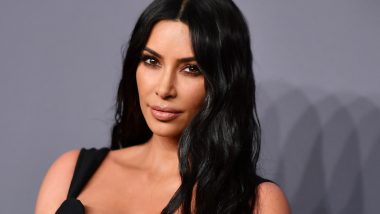 Kim Kardashian is currently going through a rough patch as rumours have it that she and husband Kanye West have called it quits. The two were living separately during the lockdown and have decided to head for divorce soon. The business mogul has not opened up about the separation yet but we haven't seen Kanye around on Kim's stories that much, hinting that the two have already parted ways. Kanye is said to be living away from the family as well. Kim Kardashian and Kanye West to Go Separate Ways Has Sparked Funny Memes and Jokes! Hilarious Reactions on the Couple’s Reported Divorce Are Mean but Will Make You LOL Hard.

Amid this drama, Kim is planning to spend the day of love with her four kids  North, son Saint, daughter Chicago, and son Psalm. "Kim is great. She has a Valentine's Day celebration planned with her kids and family. She likes to make it special for the kids. She doesn't have any contact with Kanye," informed a source to People. Kim will try and keep her distance as much as possible from Kanye. The source also added that Kim is now focused on her future with her kids which obviously means no Kanye in their lives.

On the work front, we will see Kim in the finale season on Keeping Up With The Kardashians (KUWTK) now. In this season we will possibly see discussions around Kim Kardashian and Kanye West's marriage problems and a possible divorce. A source close to the development said that the breaking relationship of Kim and Kanye's will feature heavily in the final storyline as they make their exit from the reality show. KUWTK is ending after more than a decade-long run and 20 seasons on E! later this year. Kim Kardashian And Kanye West AKA KimYe To Get Divorced?

Kim and Kanye had reportedly separated earlier during the lockdown. They are currently negotiating the terms of a divorce after nearly seven years of marriage. They have four children: daughter North, son Saint, daughter Chicago, and son Psalm and Kim and Kanye will be co-parenting them in the future. Kim is being represented by LA power divorce attorney Laura Wasser and it is said that even Kanye doesn't mind going different ways now. Various sources disclosed that they are in settlement conversation to agree on accounts and how to part their properties.

(The above story first appeared on LatestLY on Feb 14, 2021 09:29 PM IST. For more news and updates on politics, world, sports, entertainment and lifestyle, log on to our website latestly.com).