Injustice is based on a popular 2013 videogame by the same name, that is about Superman turning rogue, and trying to dominate over the Earth after suffering a personal tragedy. 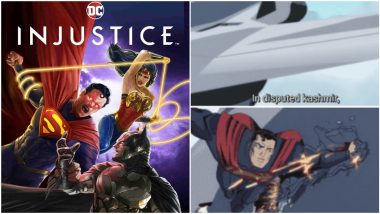 Injustice, the new DC animated movie, came out on October 12, 2021, is suddenly becoming a talking point in India. The reason? A scene in the film shows Superman solving the crisis in Jammu & Kashmir by forcible means. If you are in India or have read about the geopolitical situation of our northernmost state, you would be knowing that Kashmir is a very touchy subject for many here. Jammu and Kashmir: 2 More Non-Local Labourers Killed, 1 Injured After Being Fired Upon by Terrorists at Wanpoh Area of Kulgam.

Well, as you can expect, many of the right wingers have not taken lightly to the scene in the Injustice film. The reason for the outrage can be traced back to a news channel who ran a programme that labelled Man of Steel as 'Anti-India Superman'. The channel supporters have been running a boycott for Superman (seriously, don't laugh... we have been doing boycott of even sillier things).

So what is the whole controversy about? Let's break it down here!

Let's talk about the film first. Injustice is based on a popular 2013 videogame by the same name, that is about Superman turning rogue, and trying to dominate over the Earth after suffering a personal tragedy. The film follows that premise honestly, with Joker kidnapping a pregnant Lois Lane, and then tricking Superman to kill her, while at the same time also nuking Metropolis, killing all of the inhabitants of Superman's city.

Superman, in a murderous rage, kills Joker in revenge, much to dismay of Batman. It doesn't end here. Superman decides that enough is enough, and he is going to bring peace to the whole world by his means. Which means he is going to force peace upon warring factions by the rule of his super iron fists, with Wonder Woman joining him in his mission.

The scene that has been creating outrage on social media is merely a few second long. After solving the Gulf Crisis and civil war in an African country, Superman and Wonder Woman decide to end the arms race in Kashmir, by destroying the fight planes. A new reporter is heard in the background saying that in 'disputed' Kashmir, Superman and Wonder Woman destroyed every piece of military equipment, declaring it an 'arms free zone'. Jonathan Kent, Son of Clark Kent AKA Superman and Lois Lane, Confirmed to Be Bisexual as per New DC Comics.

The very next scene sees Superman coercing two leaders to sign a peace treaty, though the flags behind them aren't of India and Pakistan.

In fact, the scene doesn't even refer to the countries by their names. Later, however, another scene showing a globe has the POK portion of Kashmir as part of Pakistan.

Disclaimer: The entire movie is set in a different multiverse, BTW, not that it matters to the criticisers.

Zee News took offence with this particular scene and ran a programme called 'Anti India Superman'. The basic offence was that Kashmir was called 'disputed', and that Superman single-handedly (in reality, with the help of Wonder Woman) solved the crisis. This was picked up by right-wing supporters who called out the movie, saying Kashmir is solely India's.

Imagine Making This Your Primetime Coverage!

In the @DCComics new film "Injustice", Superman declares Kashmir a disputed region. Superman and Wonder Woman are seen destroying the weapons to demilitarise the region. Who’s funding such propaganda films? Is it a CIA+ISI JV post Taliban? Govt of India should fix this. pic.twitter.com/lgAXtUGQEm

Let Henry Cavill Fans Not Hear You Say This!

We oppose you @DCComics @DCSuperman

We the people of india condemn this Superman series. https://t.co/V3JqzVoJ9j #AntiIndiaSuperman

The funny part here is that if they have watched the whole movie, Injustice shows a universe where Saddam Hussein is supposedly alive. Also Superman is actually a villain here, turning into an Ultron-like dictator, using violent means to achieve global peace, with Batman and some of the surviving Justice League members, looking to stop him.

(The above story first appeared on LatestLY on Oct 21, 2021 01:43 PM IST. For more news and updates on politics, world, sports, entertainment and lifestyle, log on to our website latestly.com).