Is Chris Evans Returning to MCU As Captain America? Marvel Boss Kevin Feige Has This To Say About It

Hollywood actor Chris Evans' return as Captain America, has been the talk of the town for quite a while. Earlier a report had hinted that Evans is in talks and might be part of Marvel Universe once again. However, looks like that is not the case. Read on. 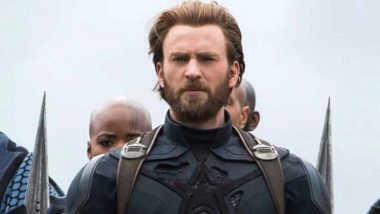 Hollywood actor Chris Evans' return as Captain America, has been the talk of the town for quite a while. Earlier a report had hinted that Evans is in talks and might be part of Marvel Cinematic Universe once again. Even after the actor dismissed the rumour long back with a 'new to me' tweet, fans of the franchise still think that there is a little possibility about his comeback. Now, setting the record straight, Marvel boss, Kevin Feige has denied Chris' return. Yes, that's right! Captain America To Return to MCU? Chris Evans’ Cryptic Tweet Shoots Down Rumours of His Return to the Marvel Franchise!

In an interview with EW, Marvel President Kevin Feige said, "I rarely answer no to anything anymore because things are always surprising me with what happens, but that rumour, I think, was dispelled rather quickly by the man himself." Chris Evans Opens Up On Why He Agreed To Play Captain America After Rejecting The Role Several Times.

So, this almost clears the air that Evans is out of the Captain America picture and no longer will be seen in the flick. We are sure, this piece of news might be harsh on the fans, but as they say, reality bites hard. As for Captain America, we saw Evans for the last time in Avengers: Endgame when he gave the shield to Sam Wilson aka the Falcon. Chris Evans Accidentally Leaks his Nude Pictures on Instagram and Twitterati are Confused (View Tweets).

Also, after playing the war veteran superhero for many years, at the time of his farewell, Evans had tweeted, "Officially wrapped on Avengers 4. It was an emotional day, to say the least. Playing this role over the last 8 years has been an honour. To everyone in front of the camera, behind the camera, and in the audience, thank you for the memories! Eternally grateful." Stay tuned!

(The above story first appeared on LatestLY on Mar 18, 2021 05:47 PM IST. For more news and updates on politics, world, sports, entertainment and lifestyle, log on to our website latestly.com).