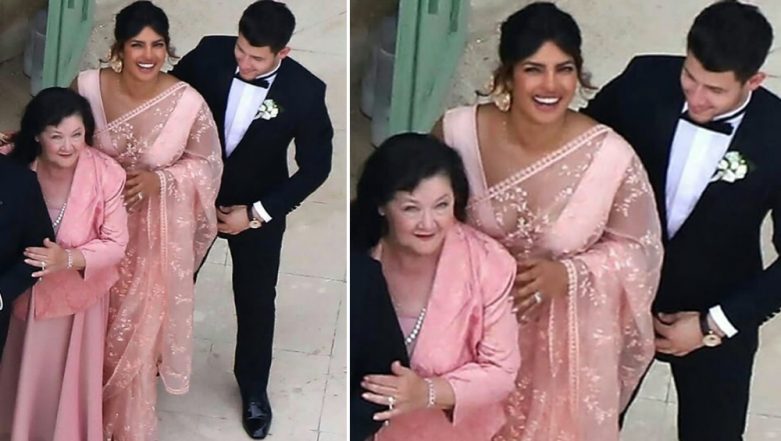 Joe Jonas and Sophie Turner tied the knot for the second time, this time in a grand ceremony in France on Saturday. The wedding was attended by their family and friends. It was a picture perfect moment as Joe Jonas, along with his brothers, Nick and Kevin Jonas and their wives Priyanka and Daniella Jonas posed for a picture. A few pictures from the wedding have now surfaced on the social media and we finally have a glimpse of what Priyanka Chopra was wearing for the big ceremony. Sophie Turner and Joe Jonas Pre-Wedding Party: Priyanka Chopra is a Sight in White as She Attends the Rehearsal Dinner.

It was a big surprise to see PC ditch the usual flowy gowns and opt for a desi look for the wedding. Priyanka Chopra was seen wearing a gorgeous pink Saree to the wedding. The Isn't It Romantic star looked absolutely stunning with her hair tied up in a bun. She looked simply stunning and fans have been going gaga over her pictures from the wedding. While PC floored us with her 'desi' look, Nick kept it simple and classy with a black tuxedo.

Check out Priyanka Chopra and Nick Jonas at the wedding:

Priyanka & her family getting ready for jophie's wedding! 💗💗

Here's another picture of Priyanka Chopra at the wedding:

Here's a picture of the Jonas family at the wedding:

Joe Jonas and Sophie Turner were first linked in November 2016, when they were spotted kissing at a Kings of Leon concert in the Netherlands. The couple has been going strong ever since. After a whirlwind wedding in Vegas recently, the couple decided to exchange vows once again in a rather grand ceremony.

We are yet to see the first pictures of the newly married couple although we did hear that the wedding ceremony was nothing short of a fairytale and we wish the couple many more years of happiness and togetherness.