Joe Jonas, Sophie Turner, Hugh Jackman and Others Come Together for a Quarantine Version of The Princess Bride and It's Hilarious! (Watch Videos) 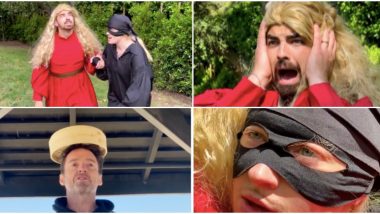 Joe Jona, Jennifer Garner, Hugh Jackman, Jack Black, Rob Reiner recently came together for star-studded rendition as they recreated Reiner's iconic film The Princess Bride. The film will be coming to mobile video platform Quibi. The film is being recreated to raise funds for the World Central Kitchen, which has provided food relief amid the COVID-19 pandemic. While we are waiting for the film, a few clips have already made it to social media. They feature the actors playing their characters and some of these clips are simply hilarious. Priyanka Chopra Jonas Extends Heartwarming Wishes To Sophie Turner – Joe Jonas On Their First Wedding Anniversary!

The idea of coming up with something like this was revealed by filmmaker Jason Reitman who told Vanity Fair, "The week that the stay-at-home order came through in California, I just woke up one of the first mornings, I think like most people did, feeling as though, All right, I need to be able to do something of value.”

In the clips that have gone viral, Joe can be seen wearing a red gown as it shows Turner in the role of Westley (originally played by Cary Elwes) and Jonas playing Princess Buttercup (originally played by Robin Wright). Hugh Jackman, Jennifer Garner and Tifanny Haddish are also seen in other clips. Check out the videos below. Sophie Turner Flaunts Her Baby Bump As She Takes a Walk With Husband Joe Jonas in LA (View Pics).

Joe Jonas and Sophie Turner in The Princess Bride:

They very much do exist IRL. Home Movie: #ThePrincessBride is a fan film benefitting @WCKitchen coming to Quibi this Monday.

Check Out Hugh Jackman, Jennifer Garner in The Princess Bride:

This version of The Princess Bride was shot amid quarantine and hence the romantic scenes were shot by real-life couples quarantining together like Neil Patrick Harris and David Burtka. We bet these hilarious clips will want to make you want to watch the entire film. Nothing like watching something fun for a good cause!

(The above story first appeared on LatestLY on Jun 30, 2020 05:03 PM IST. For more news and updates on politics, world, sports, entertainment and lifestyle, log on to our website latestly.com).