John Mulaney recently added 10 new dates to his ongoing standup tour, which he kicked off at Manhattan's City Winery in May. He is now headed to Boston's Wilbur Theater for a week-long stint, starting from August 14. 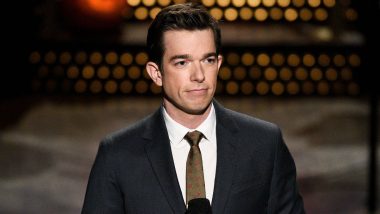 American stand-up comedian John Mulaney recently added 10 new dates to his ongoing standup tour, which he kicked off at Manhattan's City Winery in May. He is now headed to Boston's Wilbur Theater for a week-long stint, starting from August 14. According to Variety, the former 'SNL' writer, best known for his Emmy-winning 2018 stand-up special 'Kid Gorgeous', will be debuting new material in the show titled 'John Mulaney: From Scratch', in what marks his first long-term return to the live stage following a months-long hiatus. All 10 shows in Boston sold out within 30 minutes. Olivia Munn Admits She Was ‘Obsessed’ With John Mulaney Years Ago and Says She Loved ‘Hanging Out with Him’.

The 38-year-old comedian took a break from stand-up after checking into a Pennsylvania rehabilitation center in December. In his new material, he allegedly speaks candidly on stage about his experience with substance abuse and mental health issues. A review about the show read, "Candid, loose, sometimes hard to watch, sometimes so funny it made the audience convulse in laughter, it was a writing session. He was doing all-new material, not attempting to work in any of the jokes he was building in outdoor shows before rehab. It was raw, both in its frankness and in the complete lack of polish that we typically associate with Mulaney's work." Did You Know? Spider-Man: Into The Spider-Verse Almost Included Tom Cruise and James Cameron in Hilarious Cameos.

The current tour marks Mulaney's fourth hour-long special. After remaining mainly behind the curtain as a writer on 'SNL' he catapulted into fame with his first Netflix special 'New in Town', followed by 'Comeback Kid', and finally, 'Kid Gorgeous at Radio City'. He's also known for his Broadway show 'The Oh, Hello Show' with longtime friend Nick Kroll, who has also collaborated with on the animated series 'Big Mouth'. His most recent musical comedy special 'John Mulaney and the Sack Lunch Bunch' was released on Netflix in 2019.