Keanu Reeves should have his appreciation day - YES OR YES? 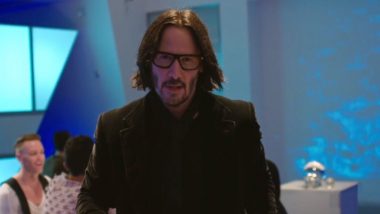 Keanu Reeves is that favourite student that we all had as our classmate. He's simply perfect and we mean in all the departments. While the Internet is going gaga over his humble attitude and the way he buys his own groceries or avoids touching women in photos, the recent obsession is to demand an appreciation day for him. Yes, we aren't even kidding when we say that his fans want to dedicate an entire day to him simply 'cos he deserves it. 'Keanu Reeves Appreciation Day' is the latest hot trend on social media and we are thinking about joining it very soon. Keanu Reeves Goes Salman Khan Way, Avoids Touching Women in Photos.

Funny memes on his appreciation day are now going viral on the internet and we are having a field time looking at them. Reeves is currently the man with a golden hand. Anything and we repeat anything that he touches turns into gold and his admirers can't stop gushing about how amazing he is. Keanu Reeves in Cyberpunk 2077 Makes Twitterati Jump With Joy - Check out Some of the Most Exciting Tweets

Check out some of the funniest memes on Keanu's Appreciation Day that may result in him having one someday.

Autocorrect won’t even let me be low key about the KEANU Reeves appreciation (it literally just did it again lmao) pic.twitter.com/3bY9EAtWpm

Why is he so original?

just keanu reeves chilling out as usual but this time dressing like a hippie and outside the dr. phil studio. why is he so original pic.twitter.com/T6FeGkfMDS

The appreciation that we never knew we had

this video gave me an appreciation for keanu reeves that i didn’t even know i had pic.twitter.com/sZSzxMjXjb

I think the internet is just about to create a Keanu Reeves appreciation day even straight men are in love with him pic.twitter.com/vCHpghHTVJ

We need it in our lives

What's the best part of praising Reeves? Well, he doesn't know anything about it. Recently at the premiere of Toy Story 4 when the John Wick actor was asked about his social media popularity, he was unaware about it. "I’ve been what?” he asked when he was informed about being the internet's latest obsession, People reported. When Keanu wrapped his head around the situation, he added, "That’s, uh, that’s wacky. Well, the positivity’s great.” And that's too cute we believe. The actor is finally getting the appreciation he deserved and we are all hearts for him. We love you Keanu Reeves.

(The above story first appeared on LatestLY on Jun 13, 2019 08:42 AM IST. For more news and updates on politics, world, sports, entertainment and lifestyle, log on to our website latestly.com).