Kendall Jenner Gets Slammed for Her 818 Tequila Brand, Netizens Tag Her as an ‘An Unseasoned White Privileged Rich Girl’

But while her friends and family were all appreciative of Kendall's new business venture, Kendall's tequila brand received major backlash online even before it was launched. 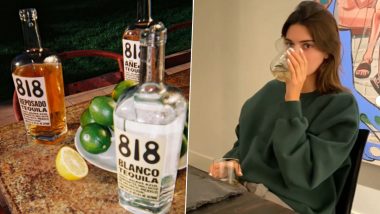 Following the footsteps of her sisters - Kylie Jenner, Kim Kardashian and Kourtney Kardashian, Kendall Jenner has also ventured out to become a successful entrepreneur. The model, who already rules the runway, is all set to introduce the world with some fine tequila. She made the announcement of the same on social media on Monday and revealed that after working for 4 years on the product, she is ready to out the tequila on the market. She named the brand 818  and shared a series of photos and videos of the tequila, revealing it has already won several awards. Kendall Jenner Is Inspiring Some Wardrobe Changes This Summer.

"For almost 4 years I've been on a journey to create the best-tasting tequila. after dozens of blind taste tests, trips to our distillery, entering into world tasting competitions anonymously and WINNING ... 3.5 years later I think we've done it! This is all we've been drinking for the last year and I can't wait for everyone else to get their hands on this to enjoy it as much as we do!" she added. "@drink818 coming soon," she revealed in the post's caption. 818 is named after the area code of Calabasas, California, the upmarket neighbourhood where Kendall and her family live.

But while her friends and family were all appreciative of Kendall's new business venture, Kendall's tequila brand received major backlash online even before it was launched. Twitteratis were upset that Kendall was exploiting the  Mexican culture and even went on to accuse the model of cultural appropriation and gentrification. A user even called her an 'unseasoned white privileged rich girl from Calabasas' who has no knowledge about the tequila business and suggested to her that she should have started a wine company instead.

Kendall Jenner starting a tequila company does not sit right w me at all… she’s an unseasoned white privileged rich girl from Calabasas what the hell does she know about tequila?! couldn’t you have started wine company instead? pic.twitter.com/MmIwIfXsjr

Am I the only one that finds it an eye roll that Kendall Jenner is coming out with her own tequila.. from jalisco, Mex.

why tf is kendall jenner making tequila and why is the design so ugly😭 pic.twitter.com/ytAG4EiJ86

Kendall Jenner starting a tequila brand, with zero knowledge on Mexican culture and calling it “818 tequila” is GENTRIFICATION. The 818 does not claim Calabasas. What about those smaller, family owned Mexican tequila/mezcal brands? They deserve the hype & support.

Something about Kendall Jenner making tequila rubs me the wrong way..like the idea of white celebrities taking from local Mexican artisans and profiting off our traditions and agricultural business yet only visit Cabos and Puerto Vallarta for vacation spots...

Kendall Jenner coming out with her own tequila brand... what’s next on the Kardashian/Jenner colonization list?

The annoying part for me is how @KendallJenner has 0 knowledge of the Mexican culture behind tequila. She said it took her 4 years to create the best tasting tequila... pic.twitter.com/er4y7JZbNk

Apart from this, Kendal was trending on Valentine's Day after she made her relationship with American basketball player Devin Booker Instagram official. She took to her Instagram stories and posted a cuddly picture that featured her and Booker. Kendall added a white heart emoticon alongside the picture that sees the 24-year old Basketball player with her near a kitchen sink slab. Kendall Jenner Makes Her Relationship With NBA Player Devin Booker Instagram Official on Valentine’s Day.

Kendall and Devin were first spotted together hanging together in Arizona in April last year, and also at a Memorial Day weekend in Los Angeles, following the same month. According to a source close to the lovebirds, the two are busy with their work most of the time and hence are taking things slow and simple right now.

(The above story first appeared on LatestLY on Feb 18, 2021 01:18 PM IST. For more news and updates on politics, world, sports, entertainment and lifestyle, log on to our website latestly.com).