Larry David Birthday Special: Did You Know He Was Related to Bernie Sanders? 5 Facts About the Curb Your Enthusiasm Star You Didn’t Know!

With Larry David creating two of the biggest sitcoms of all time, he surely has been leading an interesting life. But his life outside of his professional one is quite surprising too. 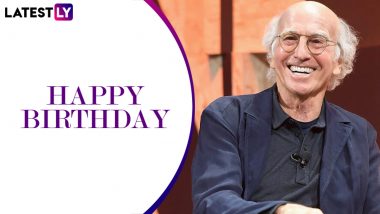 Larry David is one of the most influential TV writers in Hollywood, like really, the man’s resume is crazy. Creating two of the best comedy shows you will ever see in Curb Your Enthusiasm and Seinfeld, Larry David has continuously proved himself to be a man of immense genius. His writing is a great insight into how you can blend situational comedy into something more, and for that he will always be a legend. The Larry David Story: Larry David’s Documentary Pulled by HBO Hours Before Slated Premiere.

With Larry David creating two of the biggest sitcoms of all time, he surely has been leading an interesting life. But his life outside of his professional one is quite surprising too. So, to celebrate Larry David’s 75th birthday, let’s take a look at five facts about the star that you didn’t know.

In his early stand-up days, Larry would have quite the complicated relationship with his audiences at the show. Larry if known to have walked off the stage if he didn’t like the crowd at all. At one particular event he did so by just walking out, and not liking the crowd and then going backstage.

Larry David used to write for SNL in 1984, but would have quite the frustration as his idea would often not end up on air. In a jolt of frustration, he would quit the show only to realise he had made a huge mistake. David would then return to SNL acting like nothing had happened, and played off him quitting as a joke.

Larry David and Richard Lewis Hated Each Other

Larry David Was In the Army Reserve

David’s early life was quite interesting to say the least. The actor was in the Army Reserve at a young age, and it was no cake walk according to him. David has gone on to comment about how the training was extremely grueling.

Coming to the most shocking revelation of wall, apparently David is cousins with Bernie Sanders. Who would have thought of that? While being on Finding Your Roots, David took a DNA test and it was revealed that he was a distant cousin of Sanders. Explains those impressions of Sanders quite well to be honest.

Larry David surely has quite the interesting facts to himself. Anyways, with this, we finish off the list and wish him a very happy birthday.

(The above story first appeared on LatestLY on Jul 02, 2022 09:50 AM IST. For more news and updates on politics, world, sports, entertainment and lifestyle, log on to our website latestly.com).