Carrie Fisher, the most loved Sci-Fi Princess, would have turned 62 today. 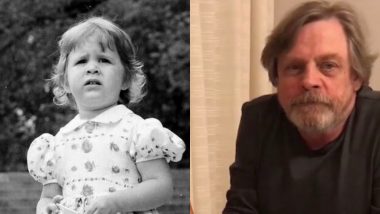 Carrie Fisher, the most loved Sci-Fi Princess, would have turned 62 today. The actress passed away in 2016 after suffering from a cardiac arrest due to sleep apnea and atherosclerosis. Her Star Wars co-star Mark Hamill shared a picture of a young Carrie Fisher with a simple HBD post. A sweet gesture from the actor who played her brother in the Star Wars franchise.

Earlier this month, via Twitter, Hamill also urged a petition for the process to lobby Hollywood Walk of Fame so as to get Carrie Fisher's name engraved on it. He shared the same on his Twitter feed, "Carrie WILL get her well-deserved Star on the Walk of Fame, it's only a matter of when. The rule is a 5-year wait when awarded posthumously. A letter to the Hollywood Chamber of Commerce wouldn't hurt, urging them to time it to the release of #EpIX #AlwaysWithUs"

The posthumous rule is a five-year one wherein a star has to wait to receive the star. However, Hamill wants to bring the honour to Fisher's name earlier and for the Hollywood Chamber of Commerce to make an exception. The actress will appear in the 9th episode of Star Wars which is due to release in 2019.

Since her sequences were shot before her death back in 2016, she will live in the movies, at least until the IX episode. JJ Abrams, filmmaker of The Force Awakens confirmed the same that she will appear as her character Leia Organa through the unused footage.

(The above story first appeared on LatestLY on Oct 21, 2018 05:40 PM IST. For more news and updates on politics, world, sports, entertainment and lifestyle, log on to our website latestly.com).