Marry Me: Jennifer Lopez Opens Up About Wearing a 43 kg Gown in Owen Wilson Starrer

Actress-singer Jennifer Lopez's wedding dress in the upcoming film Marry Me weighed over 43 kg and she needed an entourage of people to help her get dressed. 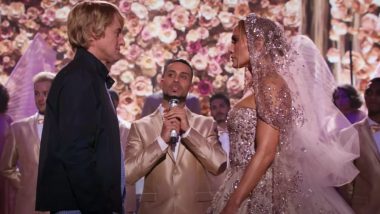 Actress-singer Jennifer Lopez's wedding dress in the upcoming film Marry Me weighed over 43 kg and she needed an "entourage" of people to help her get dressed. Costume Designer Caroline Duncan revealed to Variety: "The dress weighed 95 pounds and required five people to transport it and an entourage to get Jennifer in and out of it, but it gave the dress that volume." Fashion Faceoff: Deepika Padukone or Jennifer Lopez, Who Wore this David Koma Dress Better?

The dress was deliberately designed to be so heavy as it was meant to represent the impending burden of Kat marrying Bastian, who she ultimately discovers was unfaithful before they exchange their vows, reports femalefirst.co.uk. Caroline explained: "First, you see her get into the car, and it's a symbol of how that wedding had gotten too big, and it wasn't honest and has taken over her ability to see who she was marrying. Jennifer Lopez Shows Off Her Assets in a Plunging Tuxedo Leotard As She Poses for the Rolling Stone Cover (View Pic).

"Later, you see her in the bedroom alone on what should have been her wedding night, and here she is trapped in this claustrophobic dress that's like the concert bigger than she is. It's the loneliest shot in the movie." Although Kat's wardrobe features a number of designer pieces Caroline obtained from Net-a-Porter, Versace, Neiman Marcus and Bergdorf Goodman, the costume designer also dressed Jennifer in more affordable streetwear so her character could feel "aspirational".

She said: "Some of the stuff was not incredibly expensive. When Bastian shows up at Charlie's school, Kat's outfit is from Naked Wardrobe. We were not afraid to mix higher and lower brands, because we wanted her to feel aspirational."

(The above story first appeared on LatestLY on Feb 14, 2022 12:56 PM IST. For more news and updates on politics, world, sports, entertainment and lifestyle, log on to our website latestly.com).