Oscar-winning actor Matt Damon has revealed that he stopped using "homophobic slur" only after his daughter told him that it was not only wrong but also "dangerous". This is not the first time for Matt to talk about the relationship he shares with his daughters. 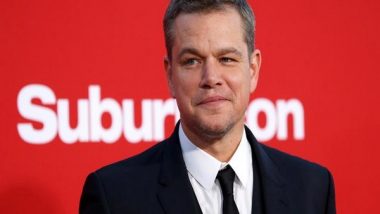 Oscar-winning actor Matt Damon has revealed that he stopped using "homophobic slur" only after his daughter told him that it was not only wrong but also "dangerous".  Thor: Love and Thunder – Matt Damon Confirms His Return as ‘Actor Loki’ in Chris Hemsworth’s Marvel Movie

"The word that my daughter calls the 'f-slur for a homosexual' was commonly used when I was a kid, with a different application," Damon said to Sunday Times of one of the four daughters whom he shares with wife Luciana, reports aceshowbiz.com. "I made a joke, months ago, and got a treatise from my daughter. She left the table," he added.

The Jason Bourne actor also shared: "I said, 'Come on, that's a joke! I say it in the movie 'Stuck on You'.' She went to her room and wrote a very long, beautiful treatise on how that word is dangerous. I said, 'I retire the f-slur', I understood."

Damon reflected on how his quotes are picked up by outlets more regularly now than before. "Twenty years ago, the best way I can put it is that the journalist listened to the music more than the lyrics (of an interview)," he said. "Now your lyrics are getting parsed, to pull them out of context and get the best headline possible. Matt Damon Shares He is Glad For Buddy Ben Affleck and Jennifer Lopez’s Rekindled Romance

"Before it didn't really matter what I said, because it didn't make the news. But maybe this shift is a good thing. So I shut up more," the actor added. This is not the first time for Matt to talk about the relationship he shares with his daughters.

Last month, he said in an episode of Sunday Morning that his children are critical of him. He shared that his 15-year-old daughter, Isabella, doesn't want to see her dad in Good Will Hunting, the 1997 film that helped him launch his career into international stardom.

(The above story first appeared on LatestLY on Aug 02, 2021 11:20 PM IST. For more news and updates on politics, world, sports, entertainment and lifestyle, log on to our website latestly.com).