Michelle Rodriguez Birthday: 5 Best Films From Her Movie Career that We Can't Stop Rooting For

As Michelle Rodriguez gets ready to celebrate her birthday today, we take a look at some of her best movie outings. 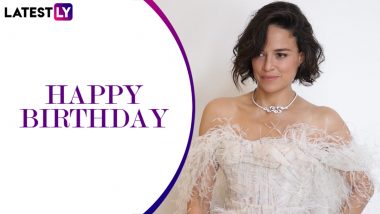 Michelle Rodriguez celebrates her birthday on July 12. While she's popularly known for playing the role of Letty in the Fast and Furious franchise, she has many other exciting projects registered under her name. Michelle has always been a powerful performer and she has proved her versatility in her different movies. While the action is probably her favourite genre, she's equally admirable in other ones. Gully Boy Celeb Review: Fast & Furious Actress Michelle Rodriguez Praises Ranveer Singh and Alia Bhatt's Film.

Speaking of Michelle and her acting proficiency, on the eve of her birthday today, let's dive into her filmography and pick five of her best outings so far. Starting with Avatar of course!

The more we say, the less it is about Avatar. A James Cameron brilliance, Avatar is gearing up for its sequel in 2022. The movie revolves around a paraplegic Marine who's sent on a mission to moon Pandora. However, things change when he gets torn between his duties and the new world that feels like his home. Michelle played the role of Trudy Chacon who dies in the final battle while saving Jack.

The return of Letty! Fast and Furious 6 was all about reuniting Dom and Letty! It was a classic FnF movie with tons of action and lots of drama. Michelle Rodriguez in particular was at her best in here, torn between her old and new identity. Michelle Rodriguez Once Again Rumoured to Be Playing Female Green Lantern and We Wonder If She Still Thinks It's the Dumbest Thing Ever.

When an ex-army veteran goes on a rampage to kill his former boss, you know, you are in for a treat. The film revolves around, Machete, who's sent on a mission to kill a Texas Senator. However, things go downhill when he starts getting hunted instead.

Michelle plays the role of Diana, who aspires to become a boxer. When she finally manages to convince her coach to start training her, she ends up ruining her relationship with her father. A sports drama that deserves all the praises and a special round of applause for Michelle and her apt portrayal.

Another zombie apocalypse! Michelle plays the role of Rain who's among an elite military unit tasked with stopping the zombie attack. A classic actioner, Resident Evil is more of those who like mindless action flicks and have a penchant for zombie movies.

(The above story first appeared on LatestLY on Jul 12, 2021 09:00 AM IST. For more news and updates on politics, world, sports, entertainment and lifestyle, log on to our website latestly.com).