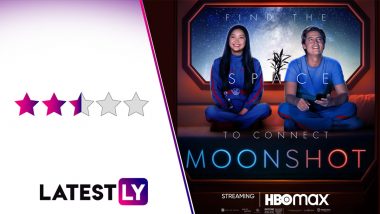 Moonshot Movie Review: Before I talk about Moonshot, this romantic movie set in space  - did Elon Musk back this movie? - let me talk about Hollywood's 'Jed Mosley' syndrome. If you are fan of the sitcom How I Met Your Mother, you would recognise Jed Mosley as the rich but insufferable fiance of the heroine of the fictional movie in it called The Wedding Bride. I guess Hollywood romcoms hate people who are too serious about work or have self-serving ambitions. Every third person in nearly every love triangle is an ambitious bigshot who gets dumped in the finale. Earlier, these work-obsessed third angles were jerks, now they are just plain boring, prompting their lovers to run into the arms of the carefree, aimless moron that comes by. Moonshot: Cole Sprouse, Lana Condor's Comedy to Release on Amazon Prime Video.

Okay, some of you might curse for spoiling a plotpoint in Moonshot for you. But if you really can't deduce if that's going to happen just by watching the trailer of the film, have you even watched romcoms? This ain't some Damien Chazelle stuff, where instead of wiping happy tears, you are clutching your hearts at a depressing ending.

Sorry, let me get back to the plot. So Moonshot is set in 2049, where Earth is just a few years away from being the wasted planet we saw in Wall-E, while Mars (and some other celestial bodies) is being scouted for human habitations. Mars already has a thriving research centre business booming on, thanks to Kovi industries, and that's where our male protagonist Walt (Cole Sprouse) wants to go. Cole Sprouse Birthday: 7 Times His Dapper Appearances Had Our Attention.

Apparently, Kovi Industries sends brilliant students to Mars to do research studies as part of their student program, and Walt, an assistant barista at a cafe where a robot is his boss, has applied for 37 times and got rejected each time.

Now let's meet Sophie (Lana Condor), an uber-rich girl in the same campus as Walt, whose boyfriend Calvin (Scream's Mason Gooding) and his family are in Mars. When his stay there gets extended, Walt, who meets Sophie at a party, convinces her to go to Mars. He piggybacks on her and manages to sneak in on the shuttle, forcing Sophie to pretend to the other travellers that he is her fiance, Calvin.

The setup is of course silly, especially how Walt manages to sneak past the security and get into the spaceship. 2012 did that first, but at least the protagonists there had someone who is familiar with the ducts and hatches to guide them on the ship. Unlike Walt who is seeing the trespass route for the very first time. Of course, we get a silly explanation of how he managed to get scot-free later on. But that didn't help me, when I had to spend more than an hour of watching sparks fly between Walt and Sophie, while wondering at the same time, 'seriously, how dumb are the tech and the people in the future?'

Again, that silly setup is merely an excuse to put two beautiful people in a room, and let their chemistry work the magic on us. In that aspect, Moonshot works big time. It's all formulaic and trope-loving about two polar-opposite but good looking, and high-on-hormones youngsters forced to spend time with each other, and yes, fall for each other in the process. Don't be fooled by the sci-fi hinks, or at one time, when the movie nearly tries to (scarily) evoke memories of Passengers - looking at you, space-walk scene! Moonshot has a storyline that is done and dusted, beaten and whisked. But still there are moments between the two leads that do get you, helped enough by David Boman's soft score. And when Sprouse and Condor are together, you don't mind the staleness of the writing, you get entertained. Still there are instances where you scream at the leads to go for that kiss and get this done away with! Lana Condor Gets Engaged To Anthony De La Torre! To All The Boys Actress Shows Off Her Engagement Ring On Social Media.

What wasn't needed here at all, is the requirement of a fourth angle in the form of Ginny (Emily Rudd), another research scholar in Mars, who Walt meets on Earth and is in love with her within a span of one day. She becomes the motivator for him to stowaway his way to the red planet. Which wasn't needed, because this is a man who had attempted to try his luck 37 times to get on the mission, without even the need of a romance to inspire him. Also, how this romantic subplot is conveniently wrapped up will leave you super-annoyed.

Talking about the actors, Cole Sprouse and Lana Condor are easily likeable in their assembly-cut roles, and that works very much in how long your patience sticks with the film. Zach Braff is also entertaining in his cameo, definitely a riff at some of the PR and space-obsessed tech honchos we know by now. As for the VFX, at times, it is decent, at times you know it's green screen.

- The Chemistry of the Leads

- More Formulaic Than the Chemistry Table

Moonshot is very much your guilty pleasure movie, if you like the mushy lighthearted romances of opposites falling for each other. But not even red sands of Mars can wash away the formulaic monotony that comes along with the film. Moonshot is streaming on Amazon Prime Video.

(The above story first appeared on LatestLY on Apr 07, 2022 06:24 PM IST. For more news and updates on politics, world, sports, entertainment and lifestyle, log on to our website latestly.com).