The trailer of No Time To Die is here and it looks amazing. The trailer takes off with a brilliant stunt and somewhere in between, we also get to see Craig mouth the iconic response to someone asking his name, 'Bond. James Bond." 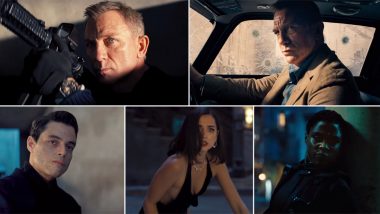 After the character posters of the upcoming James Bond film, No Time To Die were released, finally, the trailer of the film is here. Initially termed as Bond 25, the film is the 25th film in the Bond franchise and also happens to be the last one for actor Daniel Craig who has starred as the 007 agent for the past four films. With this film, actors Lea Seydoux, Ralph Fiennes, Ben Whishaw will be reprising their roles whereas the new Bond villain is the recent Academy Award winner, Rami Malek. . 'No Time To Die' Star Daniel Craig: ‘Grew Up in an Era Where, If You Were Trying to Be an Artist, You Didn’t Look for Approval’.

The trailer of No Time To Die is here and it looks amazing. The trailer takes off with a brilliant stunt and somewhere in between, we also get to see Craig mouth the iconic response to someone asking his name, 'Bond. James Bond." It does seem a little odd now that this is the last time we'll see the actor saying those words. Craig's Bond may have started to look older with each film but he certainly does not lack the charm or the gusto to pull off those deadly stunts. This time around, Bond has a mysterious villain to deal with, who is armed with some deadly technology. A key hook in the story also happens to be Madeline Swann's (Lea Seydoux) past.

The official synopsis of the film reads, "In No Time To Die, Bond has left active service and is enjoying a tranquil life in Jamaica. His peace is short-lived when his old friend Felix Leiter from the CIA turns up asking for help. The mission to rescue a kidnapped scientist turns out to be far more treacherous than expected, leading Bond onto the trail of a mysterious villain armed with dangerous new technology. "  Rami Malek's Villain is a Nasty Piece of Work Says 'No Time to Die' Producer Barbara Broccoli.

The trailer suggests that this film is going to be a gripping watch and we certainly can't wait to see the what writers such as Phoebe Waller-Bridge have brought to the film. Directed by Cary Joji Fukunaga, the film is all set to release in April 2020.

(The above story first appeared on LatestLY on Dec 04, 2019 07:36 PM IST. For more news and updates on politics, world, sports, entertainment and lifestyle, log on to our website latestly.com).