Paul Rudd Birthday: 7 Ant-Man Moments That Will Make You Fall In Love With His Marvel Movies All Over Again!

It was a euphoric moment for his fans when Marvel decided to rope in the actor as Ant-Man. The character entered MCU with Peyton Reed's 2015 release and since then he has made appearances in many franchise films. 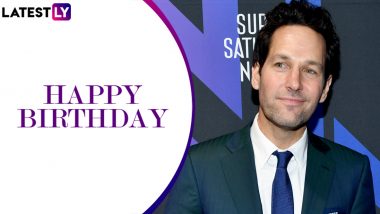 Paul Rudd needs no introduction. We remember him from his early days when he made an appearance of Friends as Pheobe's husband Mike. While the makers of the popular sitcom, didn't plan to end Phoebe and Mike together, they had to shift the paradigm because of the actor's popularity. Well, that's the magic of Paul Rudd. Lisa Kudrow's chemistry with Rudd was appreciated so much so that makers felt it would be wise and sweet if they end up together on the show. The actor has proved his talent many a times like this and this is the very reason why people love him soo much. Paul Rudd May Fight Doctor Doom or Norman Osborn in Ant-Man 3 - Read Details.

It was a euphoric moment for his fans when Marvel decided to rope in the actor as Ant-Man. The character entered MCU with Peyton Reed's 2015 release and since then he has made appearances in Captain America: Civil War and Avengers: Endgame with another solo outing of his. As the actor gets ready to celebrate his special day, we reminisce ten of his best Ant-Man moments from all the past releases. Have a look and join us in wishing him virtually. Paul Rudd Ran Over Jennifer Aniston's Injured Toe on the Set of 'Friends'.

When He Tries His Ant-Man Suit For the First Time

The Giant Man Scene from Ant-Man and The Wasp

The Kitchen Fight Scene From Ant-Man and the Wasp

The Street Battle from Ant-Man and the Wasp

Paul does manage to bring a smile on our face every time he's on-screen. For the ones who haven't seen, do watch his episodes from Parks and Recreation. He had a cameo where he played a spoilt brat, Bobby Newport and his character though dumb, was also charming throughout. Here's raising a toast to his piano playing skill and of course, for the brilliant actor that he is. Happy Birthday, Paul.

(The above story first appeared on LatestLY on Apr 06, 2021 08:21 PM IST. For more news and updates on politics, world, sports, entertainment and lifestyle, log on to our website latestly.com).