Prince Harry And Meghan Markle's Second Wedding Anniversary: It All Began With A Blind Date

Prince Harry and Meghan Markle's love story and the wedding is nothing short of the many Hallmark romantic films that we have watched. On their second wedding anniversary, let us recall how their blind date happened. 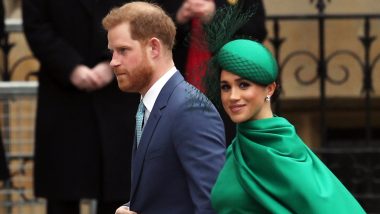 Prince Harry and Meghan Markle's love story and consequent wedding are stuff we hear in Hallmark movies. A Prince falls for a commoner and against all odds marries her, yup that's what happened. So it also proves that those romantic movies aren't just fairy tales but could be a reality too. Anyway, so Harry and Meghan celebrate their second wedding anniversary today. This wedding created a huge stir with mud-slinging matches included in the itinerary. But their love story has always managed to warm hearts despite all the hate. It all began with a blind date and Prince Harry had no clue who Meghan Markle was. Baby Archie Turns 1! Meghan Markle Reads to Her Toddler Son on His Birthday in New Adorable Video Filmed by Prince Harry

Today, it's a known fact that the 'common friend' who introduced both is Ralph Lauren's PR director Violet von Westenholz. The Von Westenholz are family friends of the British Royalty and as per a source who revealed it to E!, Prince Harry had confided in Baron von Westenholz that he needs a fix for his dating life. The source had revealed, "He can hardly go on Tinder or a dating app like normal people, but to meet someone that you actually connect with, that was proving to be almost impossible."

Violet had become friends with Meghan because of her work with Ralph Lauren. The source further added to E!, "And so when Harry told Violet he was having trouble finding someone, Violet said she might just have the perfect girl for him.”

On the BBC interview, which was the couple's first interaction with the press after their engagement, Meghan did reveal what it was on the first date. “It was definitely a set-up. It was a blind date. I didn’t know much about him and so the only thing I had asked her when she said she wanted to set us up was, I had one question, I said ‘Was he nice?’ Harry in the same interview mentioned that he hadn't watched Meghan on The Suits and didn't know much about her.

(The above story first appeared on LatestLY on May 19, 2020 01:53 PM IST. For more news and updates on politics, world, sports, entertainment and lifestyle, log on to our website latestly.com).