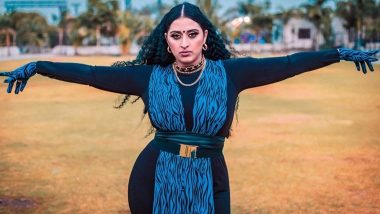 "In America, I was asked to leave behind my culture and assimilate, and in India, I was told I didn't belong to my culture because I wasn't born here. I decided to re-claim this term and make it my own. My upcoming EP The Bridge, is about symbolising bridging the east and the west, the ancient and the modern, and connecting us from the old world to the new," she added. Indian-American Rapper Raja Kumari Releases New Music Video Titled ‘Karma’

Talking about working on the single, the Grammy-nominated songwriter-rapper said: "The EP was mostly recorded in Mumbai, but this song in particular was written in Los Angeles. We shot the video for this just as the borders were closing for India, the morning of my flight. We've been able to edit the video while we've been in quarantine. I knew ‘N.R.I.' would never be complete without both sides -- my American and Indian story, and I hope you'll share your #mynristory with the world as well."

The track offers a look into her upbringing, highlighting the duality of growing up in two different cultures and being made to feel alien in both. She throws some sarcastic puns like ""sorry that my sari ain't Indian enough and America don't love me because I'm Indian as f**k, bindi on your third eye but your third eye closed, too brown for the label too privileged for the co-sign".

Produced by American record producer and songwriter Rob Knox and co-written by Grammy-Award winning American hip hop recording artist Sirah, the track was penned in Los Angeles whilst the video was shot in India right before the country declared the lockdown to fight the ongoing global pandemic. Rob Knox said: "We wanted to make something that felt international, bringing together western pop and hip-hop while calling to Raja's Indian roots and my Egyptian background."

(The above story first appeared on LatestLY on Apr 24, 2020 03:59 PM IST. For more news and updates on politics, world, sports, entertainment and lifestyle, log on to our website latestly.com).