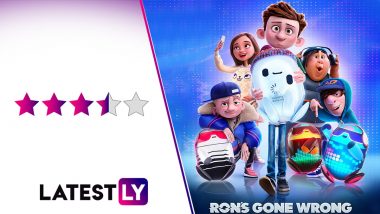 Ron’s Gone Wrong Movie Review: We have had a lot of films that have been talking about the impact social media has on society. Some are more heavy and serious with its concepts and some take a more lighthearted approach. Ron’s Gone Wrong I feel is like best of both worlds where it wraps around those concepts in a layer of being a family film. Ron’s Gone Wrong: Zach Galifianakis, Olivia Colman’s Animated Movie To Release in India on October 29!

Ron’s Gone Wrong focuses on Barney and his family who are trying to make ends meet. When a new gadget arrives in the market by the name of B-Bot, it is literally what every kid owns. B-Bot is basically a robot that acts like a social platform. Kids can make friends through it or upload videos or just in general do what every social platform does. Barney, being poor, is not able to get it, but luck strikes when his dad buys off a busted B-Bot from a guy in the back alley and so begins the story of Ron’s Gone Wrong.

First and foremost, you have a great story of friendship over here. Ron’s Gone Wrong has a lot to say about the age of social media and it does get its points across quite well. The story is fun, cute, charming and everything you would want from a kid’s film. Even with its concepts, it doesn’t beat you over the head with it but rather lets the story and visuals do the talking. It adherently follows the rule of “show, don’t tell” and it’s something that I really appreciate here. It also has some really funny gags that play to the concepts of the film in a really good way.

Now with it being an animated film, how does the animation stack up? Well quite good. It doesn’t really reinvent the wheel here like maybe what Pixar has been doing for the last few years or something like Spider-Man: Into the Spider-Verse, but it is really pretty to look at. There are some certain frames that actually do look really nice and I thought the animation overall was well done.

There are great colourful sets of characters too. Barney and Ron are two of the main leads and it is their chemistry that holds the film together. Jack Dylan Grazer voices Barney and is really good in the film, but the highlight of course is Ron voiced by Zach Galifianakis. Ron could easily have been a very annoying character, but surprisingly he isn’t. His character design is really adorable and he has the most growth out of any character in the film. Also a special shoutout to Olivia Colman for playing Donka, Barney’s grandma from Bulgaria. It’s a funny role that I think she completely knocks it out of the park, especially with that Russian accent.

But Ron’s Gone Wrong does have a lot of wrong in it too  (that joke was eventually coming). While the concept of it does standout from similar stories, it can’t help but fall into the realm of clichés. You have your standard clichés that plagues every animated film aimed towards children. It ended up being predictable for me in many cases. Although I have to admit, the ending did actually subvert my expectations a bit and I quite liked it. Ron’s Gone Wrong Trailer: Barney's B-Bot’s Malfunctions Lead to an Action-Packed Journey That's Unmissable! (Watch Video).

The film also has a really lackluster villain. There isn’t much to him rather than him just being bland. For example you take Despicable Me. Vector in the first film is just an evil guy, but at least he has some charm to him that makes him memorable. Over here Andrew, played by Rob Delaney just didn’t have much to him. So much so that at the time of writing this I had to look up his name just to remember who he was. I really couldn’t care much and everytime he was on screen I wanted the story to go back to Barney and Ron. Overall I think the villain could have used a bit more of flair to him rather just being a character we have seen million times already in different animated films.

I thoroughly enjoyed my time with Ron’s Gone Wrong. While it does run into the usual predictability and clichés of animated films, Ron’s Gone Wrong still tells a poignant story about the impact of social media on humans. It won’t blow your mind away, but if you have a kid and want to treat them to a fun afternoon at the cinema, then Ron’s Gone Wrong is the perfect watch.

(The above story first appeared on LatestLY on Oct 28, 2021 11:01 AM IST. For more news and updates on politics, world, sports, entertainment and lifestyle, log on to our website latestly.com).