Shang-Chi and the Legend of the Ten Rings End-Credit Scenes Explained: The Surprise Cameos and How Simu Liu's Film Plays Into the Future of MCU's Phase 4 (SPOILER ALERT)

Shang-Chi and the Legend of the Ten Rings directed by Destin Daniel Cretton is out in cinemas right now and stars Simu Liu, Awkwafina, Tony Leung, Michelle Yeoh and more. 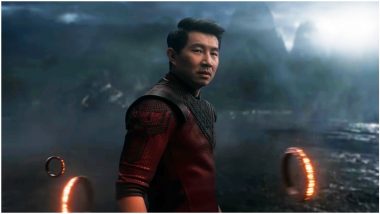 Shang-Chi and the Legend of the Ten Rings stars Simu Liu and follows our titular hero on his journey that forces him to face his past. It's Marvel’s first only theatrical release in a long time and fans have been greatly anticipating this film. It’s the first Asian lead Marvel film that we have had and it’s going to be a huge groundbreaking event for the comic book genre. Shang-Chi and the Legend of the Ten Rings Movie Review: Simu Liu's Marvel Superhero Film is A Grand Spectacle Bolstered by a Diverse Story and Cast.

The mid-credits feature Wong taking both Shang-Chi and Katy to the Sanctum Sanctorum. There they are greeted by Bruce Banner (Mark Ruffalo) and Carol Danvers (Brie Larson) talking to them through holographic projections. The interesting part here being that Banner is in his human form and still has the arm sling around him. Over there they discover that the Ten Rings are older than a 1,000 years old and are acting as a sort of beacon for something. The conversation between the group ends and Banner and Danvers log off. Wong then tells Shang-Chi to get used to this as more of it will be happening in the future.

The Post-Credits scene helps in setting up the future of where Shang-Chi’s story might go in the sequel. Featuring Shang-Chi’s sister Xu Xialing, we see her take over the Ten Rings organisation and become its leader. The scene ends with a banner saying that the Ten Rings will return. Shang-Chi Star Simu Liu Loves Shah Rukh Khan and Late Irrfan Khan; Finds Aishwarya Rai Bachchan, Priyanka Chopra Jonas Beautiful.

The mid and post-credits scene do a great job of setting up the future of these characters. It was fun seeing the return of Bruce Banner and Carol Danvers on the big screen.

Shang-Chi and the Legend of the Ten Rings directed by Destin Daniel Cretton is out in cinemas right now and stars Simu Liu, Awkwafina, Tony Leung, Michelle Yeoh and more.

(The above story first appeared on LatestLY on Sep 03, 2021 09:21 AM IST. For more news and updates on politics, world, sports, entertainment and lifestyle, log on to our website latestly.com).