The production of the movie is set to begin in early 2021, with Larrain and Juan de Dios Larrain producing through their Fabula banner, along with Jonas Dornbach, Janine Jackowski and Paul Webster. T 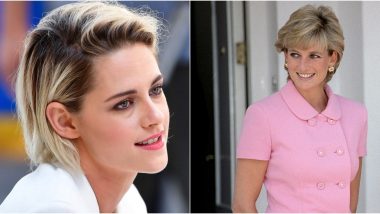 Kristen Stewart has bagged a biggie as she has been locked to essay the role of Princess Diana in Spencer to be directed by Pablo Larraín. The film will be scripted by Steven Knight. As per reports, the film will revolve around the time in the early 90s when Princess Diana decided that her marriage with Prince Charles wasn't working and when she was ready to step away from the Royal family and step away from being in line to become the queen. The film is reported to tell the story of her last Christmas at the House of Windsor. Anna Kendrick Wanted to 'Murder Everyone' on the Sets Twilight.

The production of the movie is set to begin in early 2021, with Larrain and Juan de Dios Larrain producing through their Fabula banner, along with Jonas Dornbach, Janine Jackowski and Paul Webster. The news of Kristen's casting has certainly taken everyone by surprise. Speaking about how the actress was cast for this role, director Larrain told Deadline, "Kristen can be many things, and she can be very mysterious and very fragile an ultimately very strong as well, which is what we need. The combination of those elements made me think of her."

Well, any big casting like this gets a massive response from Twitterati and Kristen playing Princess Diana certainly became a trending topic. There have been mixed reactions about her casting and some even pointed out how the Twilight couple have bagged big projects with Robert Pattinson now playing Batman. Here are some reactions. Yo or Hell No! Kristen Stewart in a Red Chanel Evening Gown at Venice Film Festival 2019.

Aaaaah, what a year for being a fan.

Watch out world, this is a renaissance. pic.twitter.com/w1p7POdX5M

Um ... So Kristen Stewart is set to play Princess Diana? Um... Yes, I am here for it!!! The world has been sleeping on K-Stew talent for real. Seberg? Personal Shopper? Time for her to *cough* sparkle!! 😅😃😉. Honestly, I want to witness this #KristenStewart #PrincessDiana pic.twitter.com/3B7fOShatW

Me freaking out when #KristenStewart is on trending worrying about my queen, but instead found out that she's actually gonna be a Queen. She's been cast to play Princess Diana in a upcoming movie pic.twitter.com/AimOJXKHUy

They should get robert patterson to play prince charles for old times sake #KristenStewart pic.twitter.com/QxEHHEaMxI

It is yet to be announced, who will be essaying the role of Prince Charles in the film. Spencer will be shopped to buyers at this year’s virtual Cannes market.

(The above story first appeared on LatestLY on Jun 18, 2020 09:27 AM IST. For more news and updates on politics, world, sports, entertainment and lifestyle, log on to our website latestly.com).