A new picture of actor Kristen Stewart as late Princess Diana has been unveiled and the resemblance between the star and the late royal is downright uncanny. In the recently-released still, Stewart is in complete character as Princess Diana, down to her accessories. 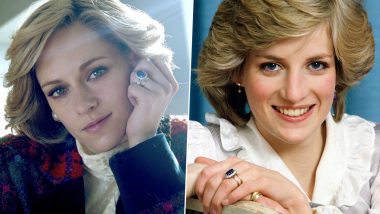 A new picture of actor Kristen Stewart as late Princess Diana has been unveiled and the resemblance between the star and the late royal is downright uncanny. In the recently-released still, Stewart is in complete character as Princess Diana, down to her accessories. The image shows Stewart looking straight into the camera with her head resting on her hand, which is adorned with a replica of Princess Diana's sapphire and diamond engagement ring. Diana's oldest son Prince William later proposed to Kate Middleton with the famous ring, which Kate still wears. Spencer: Kristen Stewart Has a Striking Resemblance to Princess Diana In her First Look From Pablo Larrain’s Next.

The official account of one of the production companies behind the film, Neon, released the picture on Instagram with a caption that read, "That sapphire. Pablo Larrain's SPENCER is coming this fall." Neon had released the first look of the star in full costume in January, showing Stewart's strong resemblance to Diana in a red coat, blonde locks, and a black hat with delicate netting over her face as she looks off to the side. Spencer, which has begun filming, is being helmed by Pablo Larrain and is based on a screenplay by Steven Knight, known for writing popular TV shows like 'Peaky Blinders', reported People magazine. Kristen Stewart on Playing Princess Diana in Spencer: It’s a Really Meditative Project and Has an Emotionally-Packed Story.

The title of the film was derived from Diana's maiden name. Diana was a free-spirited woman who married Prince Charles. The late princess has been essayed on screen several times, most recently by actor Emma Corrin in the fourth season of Netflix's popular series 'The Crown'. The film, which is eyeing a fall 2021 release, is set over the course of a weekend in December 1991, when Princess Diana joined the royal family for Christmas as the Sandringham Estate -- and decided to leave her fractured marriage to Prince Charles.

Speaking about the film, Stewart had said, "Spencer is a dive inside an emotional imagining of who Diana was at a pivotal turning point in her life. It is a physical assertion of the sum of her parts, which starts with her given name; Spencer. It is a harrowing effort for her to return to herself, as Diana strives to hold onto what the name Spencer means to her." Timothy Spall, Sally Hawkins and Sean Harris are also part of the cast of the upcoming movie.