The Boss Baby 2: Family Business Trailer : The Templeton Brothers Are on Yet Another Exciting Mission That You Don't Want to Miss (Watch Video)

The film will see James Marsden essay the role of Tim while Alec Baldwin will step in the shoes of Boss Baby. Eva Longoria, Amy Sedaris, Ariana Greenblatt, Jeff Goldblum are also a part of the film. 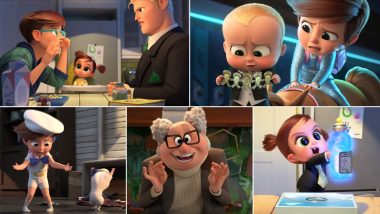 Boss Baby is definitely the most adorable baby we have seen in an animated series. The film based on the lives of two brothers has a huge fanbase and everyone was waiting with bated breath to see what the makers have to offer next. After a successful release of the first film, the makers are now gearing up the release of its sequel. The Boss Baby: Family Business is two times the craziness we saw earlier and the trailer of the same is finally out! Alec Baldwin Drops Out Of 'Joker' Film.

The trailer takes us years ahead of the present time where the two brothers Tim and Boss Baby Ted have grown up to become adults. The two have unresolved issues which get elevated when Boss Baby visits his elder brother. Little do they know that Tim's infant Tina is a top-secret agent for BabyCorp. She is on a mission to uncover the dark secrets behind her elder sister Tabitha’s school and its mysterious founder, Dr Edwin Armstrong. She takes the Templeton brothers on this mission which helps them reunite in unexpected ways.

The trailer is quite intriguing and will keep you hooked till the end. Seeing the Templeton brothers on the screen again is a treat and we are sure that after seeing the trailer you will be eagerly waiting to know what happens next. Amber Heard, James Marsden, Whoopi Goldberg To Be Part of Stephen King's The Stand Series! Read Details.

The film will see James Marsden essay the role of Tim while Alec Baldwin will step in the shoes of Boss Baby. Eva Longoria, Amy Sedaris, Ariana Greenblatt, Jeff Goldblum are also a part of the film. Lisa Kudrow and Jimmy Kimmel also reprise their roles as Ted and Tim’s parents.

The first film earned more than $500 million worldwide and is expected to get the same response this time as well. The Boss Baby: Family Business is directed by returning filmmaker Tom McGrath and is produced by Jeff Hermann.

(The above story first appeared on LatestLY on Nov 24, 2020 11:03 PM IST. For more news and updates on politics, world, sports, entertainment and lifestyle, log on to our website latestly.com).