The House With A Clock in Its Walls Movie Review: Jack Black and Cate Blanchett's Film Has Enough Attractions to Entertain You

The House With A Clock in Its Walls is entertaining, with some good VFX and an interesting premise! 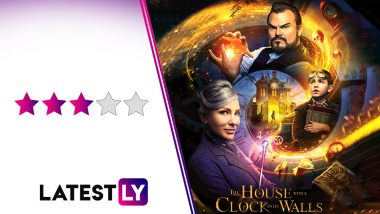 The House With A Clock in Its Walls Movie Review

What's with cult directors veering away from their favourite genres? Last week, we saw Anurag Kashyap, known for his dark, gritty movies, make a romantic film in Manmarziyaan. This week, we get Eli Roth, who has made a career in torture porn films like Hostel series, Cabin Fever and The Green Inferno, making a film aimed at the kids in The House With A Clock in Its Walls (quite a mouthful name). It is based on a novel with the same title. So does Roth, whose films also include adult thriller Knock, Knock and actioner Death Wish, manage to do good with this change in genre? Not bad, I must say!

In 1955, a recently orphaned Lewis (Owen Vaccaro) is asked by his estranged uncle Jonathan (Jack Black) in his house in New Zebedee, Michigan. If Lewis finds his sweet uncle and his quibbling friend Florence (Cate Blanchett) strange, his new accommodation is even stranger what with changing paintings and living furniture. Lewis discovers that his uncle is a warlock and the house owns a dark secret that is ticking loudly within the wall somewhere. We Can All Bow Before Sonam Kapoor Because Hollywood Stars Cate Blanchett And Lady Gaga Are Copying The Bollywood Fashionista's Looks- View Pics!

Are you a fan of '80s cult kids movies like The Goonies, Young Sherlock, The Monster Squad or even the 2015 film Goosebumps? Even though these films have kids as their protagonists, they are dark in their themes but not dark in their treatment. The House With A Clock In Its Walls is a movie like that. It uses our childish fascination for the morbid and uses it to narrate an interesting story.

At 105 minutes long, The House With A Clock in Its Walls doesn't overstay its welcome and manages to retain a crisp narrative with no unnecessary subplots. Even the one with Lewis's double-faced schoolmate (Sunny Suljic) is needed to give the movie a needed twist.

The whole house setup is terrific with some really excellent art design ( and pretty decent VFX. Even the costuming is fine, as it suits the characters and the eras. The same cannot be said of the lingo spoken by the kids or how certain behavioural patterns fit the '50s.

There are quite a few amusing scenes in the film that will appeal to the kids. However, I never understand the need to add so many poop and fart jokes. One time is giggle-worthy, more than three is cringe! Eli Roth (who also has a very brief cameo in the film as a character in a TV show) may miss peeling the flesh of people here, but he does try some stuff with the macabre, even inserting WWII-PTSD as a motivation for one character's dark deeds. Having said that, the screenplay is very predictable, save for a couple of character twists. The whole evil wizard Izard (Kyle MacLachlan) saga is very passable, making the final act an okay affair even with the whole humanity ending idea (everyone seems to have a Thanos complex these days). For some reason, the makers even get the idea of having a baby with a Jack Black head, and think it would be an amusing affair. Unfortunately, it gives us the creeps. And you also make him pee! Interestingly, there are other characters who also get affected like Jonathan, but they don't end up with a big head.

The movie also borrows a lot of influences from Harry Potter (including a villain getting reanimated), Monster House, The Goonies and even Goosebumps. Goosebumps 2: Haunted Halloween Trailer: Slappy Leads The Monsters to Torment The World Again But Where is Jack Black's RL Stine?Watch Video!

Owen Vaccaro, who looks like a very young Dylan Minnette, is really good and has a bright future. This could be the most straight-faced role Jack Black has done, so that's a surprise (especially if you have Count Olaf in your mind when you see his character first). Cate Blanchett's role doesn't demand much from the Oscar-winning actress. She still managed to bring some amount of depth and mirth in her performance. Kyle MacLachlan is okay.

- The house (set design and VFX)

- The short duration with some entertaining moments

- The final act is passable

- Too many poop jokes

- Influences from other movies

The House With A Clock in Its Walls is entertaining, with some good VFX and an interesting premise! Give it a try!

(The above story first appeared on LatestLY on Sep 19, 2018 10:44 PM IST. For more news and updates on politics, world, sports, entertainment and lifestyle, log on to our website latestly.com).