Venom Let There Be Carnage Review: Tom Hardy’s Spider-Man Spinoff Is Not at All Satisfying, Feel Critics

Venom Let There Be Carnage is a superhero film that stars Tom Hardy, Michelle Williams, Naomie Harris, Reid Scott, Stephen Graham, and Woody Harrelson. Check out what critics have to say here. 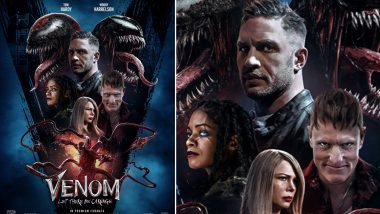 The reviews of the Marvel film Venom: Let There Be Carnage are out! The much-awaited film which will release in Maharashtra on October 22 seems to be a nay watch as per the early reactions of the critics. Helmed by Andy Serkis, it stars Tom Hardy as the lead alongside Michelle Williams, Naomie Harris, Reid Scott, Stephen Graham, and Woody Harrelson. The story of the flick revolves around how Hardy as Brock revives his career in journalism by interviewing serial killer Cletus Kasady (Harrelson). And well, just in case, you are confused about whether to watch the MCU flick or not? The answer lies below. Venom Let There Be Carnage: Tom Hardy’s Spider-Man Spinoff to Arrive in Maharashtra on October 22; Rest of India Sees Its Release on October 14.

IGN: "Taking itself less seriously and having more fun, its relatively short runtime is packed densely with plenty of action, character development, and campy humor. At the same time, it’s a love story about relationships evolving and learning to grow and trust each other. Venom as a series is working through its growing pains, but it looks like it’s uphill from here."

The Guardian: "It’s at least a short film, clocking it at around 90 minutes, Serkis chopping off any extraneous fat, but it floats by and floats on without ever causing us to sit up and pay attention. Let there be no more." Venom: Let There Be Carnage - Tom Hardy’s Anti-Hero Film Arrives on October 15 in India.

Gizmodo: "There’s just a lot going on in Venom: Let There Be Carnage. It’s a stuffed 90 minutes during which you’ll sit in dumbfounded awe at the manic, fast-paced film you’re watching. The story itself mirrors that as it moves from beat to beat without any satisfying impact."

Gazettextra: "The climax is predictably chaotic and cacophonous, and while the action may be a mess, at least it doesn’t overstay its welcome. Venom: Let There Be Carnage dares to be a tight 90 minutes, unprecedented in these times. There’s some humor and romance, a splash of comic book violence, references to the lore and a story about friendship, all in an hour and a half. "

Venom Let There Be Carnage will be out in US cinemas on October 1 and in the UK and Indian theatres on October 15. Stay tuned!

(The above story first appeared on LatestLY on Sep 30, 2021 07:30 PM IST. For more news and updates on politics, world, sports, entertainment and lifestyle, log on to our website latestly.com).