Zac Efron Birthday: 5 Amazing Movies of the Actor That Prove He Is More Than Just a Pretty Face 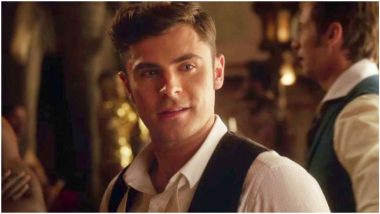 Zac Efron turns 33 today. The actor came into our lives as Troy Bolton in the Disney movies High School Musical. He was the basketball player with an affinity for singing. For some time, the actor was stereotyped as the teenage star as it happens with many teen actors. Being so incredibly handsome was, of course, beneficial in advancing his career, but it also sometimes reduced it to him as just a pretty face. Well, if you, too are suffering from the misunderstanding that Zac has not shown his acting potential, let us redirect you to some amazing movies starring him. Zac Efron Birthday Special: His Red Carpet Attempts are Cute and Dapper, All Rolled Into One (View Pics).

The actor has shown his potential time and again. He has shown us his comic side. He has shown that he can be dramatic. And, of course, he can also play a menacing character well. Zac Efron Returns To Disney With The Remake Of Three Men And A Baby.

Zac starred in this comedy alongside Seth Rogen and Rose Byrne. It might look like your run of the mill slapstick comedy, but it is not. It is smart and edgy. Zac stunned us with his comic timing. The movie was followed by a sequel.

The actor played the role of the serial killer Ted Bundy in this movie inspired by a real-life criminal mastermind. Suddenly, the man of dreams turned into a nightmare with this character that he played so well.

Zac starred alongside Hugh Jackman in this period drama about P.T. Barnum’s attempt to create a circus full of the weird and the wonderful. Fans adored Zac's chemistry with Zendaya.

In this stoner comedy, Zac was far away from vanity with a hipster hairstyle and beard. The movie directed by Harmony Korine also starred Matthew McConaughey, Snoop Dogg, Isla Fisher, Jimmy Buffett.

In this romantic musical, Zac played the role of the narcissistic Link Larkin, the lead male dancer on The Corny Collins Show. The movie also starred Queen Latifah, John Travolta, Nikki Blonski, Amanda Bynes and Michelle Pfeiffer among many others. Zac managed to register his presence strongly even in an ensemble cast.

(The above story first appeared on LatestLY on Oct 18, 2020 04:39 PM IST. For more news and updates on politics, world, sports, entertainment and lifestyle, log on to our website latestly.com).