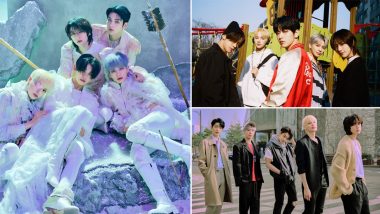 The K-pop boy band Tomorrow X Together, popularly called TXT, released their second studio album "The Chaos Chapter: Freeze" on Monday. The album begins the 'Chaos Chapter', which is the band's second album series following their previous 'Dream Chapter' series. It tells the story of a boy who was frozen as a result of the onslaught of the world. BTS Kim Taehyung’s Snippet of ‘Sleep’ Solo Song Released! K-Pop ARMYs Are in Love With the Dreamy Track (Watch Video).

The declaration of a boy's first love takes musical form in the title track "0X1=LOVESONG (I Know I Love You) feat. Seori". The song uses numbers to visually represent that in this world of zero, "you" are my one and only. K-Pop Funny Memes and Jokes: Whether You Are ARMY or BLINKs, These Reactions Are Hilarious AF & Will Bring Happy Tears in Your Eyes!

Check Out the Song Below:

(The above story first appeared on LatestLY on May 31, 2021 05:23 PM IST. For more news and updates on politics, world, sports, entertainment and lifestyle, log on to our website latestly.com).