K-Pop Funny Memes and Jokes: Whether You Are ARMY or BLINKs, These Reactions Are Hilarious AF & Will Bring Happy Tears in Your Eyes!

K-Pop is even dominating the ever-rising meme culture. Whether you are an ARMY obsessed with BTS, or BLINK and just cannot have enough of the BLACKPINK, these reactions are hilarious AF and will give you another reason to fall in love with the Korean pop artists. 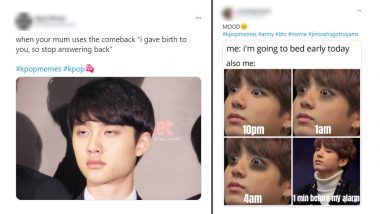 K-Pop, short for Korean pop music, the genre that has created massive followers from across the globe is a wave everyone familiar with. They call it Hallyu, the Korean wave, the idea that South Korean pop culture has grown in prominence to become a major driver of global culture. They are seen in everything! From Korean dramas on Netflix to skincare regime to fashion and delicious tacos, there is hardly anything left that the Korean culture is not dominating. And at the heart of Hallyu is the ever-growing popularity of K-Pop. They are even dominating the ever-rising meme culture. Don’t you believe us? In this article, we bring you the hilarious K-Pop funny memes and jokes to prove just how global phenomenon the Korean pop musicians have become over the years. Whether you are an ARMY obsessed with BTS, or BLINK and just cannot have enough of the BLACKPINK, these reactions are hilarious AF and will give you another reason to fall in love with K-Pop. Ready for happy tears?

Korean pop has become a global phenomenon, all thanks to its distinctive blend of addictive melodies, slick choreography and of course, colourful fashion. In the past five to ten years, we have witnessed the insane evolution of South Korean artists. EXO, BLACKPINK, Big Bang, BTS, GOT7 and so many other bands have earned massive followers. It is no wonder that whatever they announce, it soon becomes an enormous hit on the internet. Recently BLACKPINK released a teaser for its global event, and BLINKs just went crazy over the video. And we don’t even want to begin with BTS’ Jungkook and his latest title of being the Sexiest International Man Alive 2020.

As a whole, songs, performers, fashion and more, all of it show us that K-Pop stars can excel at everything from singing to rap to dance to now even comedy. There are so many memes; all the credit goes to the K-Pop artists and their expressions that has inspired meme-makers to create jokes in a bid to spread laughter. Let us check out some of the hilarious reactions that are so apt!

BESTFRIEND: “can you stop being so extra”

Friend: where are you?

when your mum uses the comeback “i gave birth to you, so stop answering back”#kpopmemes #kpop pic.twitter.com/Oil2wfiYi3

Well, the K-Pops are now here to rule the meme-world. The above are only a few, out of many reactions that followers have compiled. It is tremendous to see how K-Pop has been strategically designed to elevate South Korea and its culture onto the world stage.

(The above story first appeared on LatestLY on Nov 24, 2020 06:10 PM IST. For more news and updates on politics, world, sports, entertainment and lifestyle, log on to our website latestly.com).