Kanye West Has Reportedly Dropped Out Of 2020 US Presidential Race

Although reports now suggest that the singer has dropped out. As reported by New York magazine, it was West's election strategist Steve Kramer who confirmed the same. 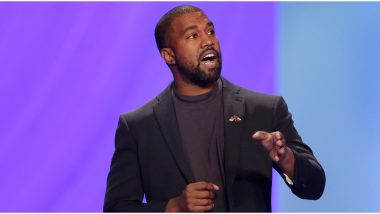 Kanye West became a top Twitter trend after reports of him contesting for US Presidential elections 2020 were out. The rapper announced his entry into the presidential arena in a July 4 tweet as he said, "We must now realize the promise of America by trusting God, unifying our vision and building our future. I am running for president of the United States." Although reports now suggest that the singer has dropped out. As reported by New York magazine, it was West's election strategist Steve Kramer who confirmed the same. Kanye West Plans To Run The US Just Like Marvel Movie Black Panther's Wakanda!

Kramer was hired by West to help get his name on the ballot in Florida, South Carolina and other states, according to the magazine. It was later reported by the magazine that Kramer confirmed West dropping out of the elections after he said, "He's out." He was also later quoted saying, "I have nothing good or bad to say about Kanye. Everyone has their personal decision about why they make decisions. Running for president has to be one of the hardest things for someone to actually contemplate at that level.”

West is yet to personally confirm the news of him bowing out of 2020 elections. As per reports West had attempted to get his name on the ballot as a third-party candidate and needed to collect 132,781 signatures by Wednesday (15 July) to be eligible to run in Florida. Kanye West Announces Bid for US Presidential Election 2020.

Well, look like Twitterati is going to have to wait a while before Kim Kardashian becomes first lady and Kanye President Of United States. After his announcement, netizens had a field day discussing what West's presidency would be like.

(The above story first appeared on LatestLY on Jul 15, 2020 06:21 PM IST. For more news and updates on politics, world, sports, entertainment and lifestyle, log on to our website latestly.com).