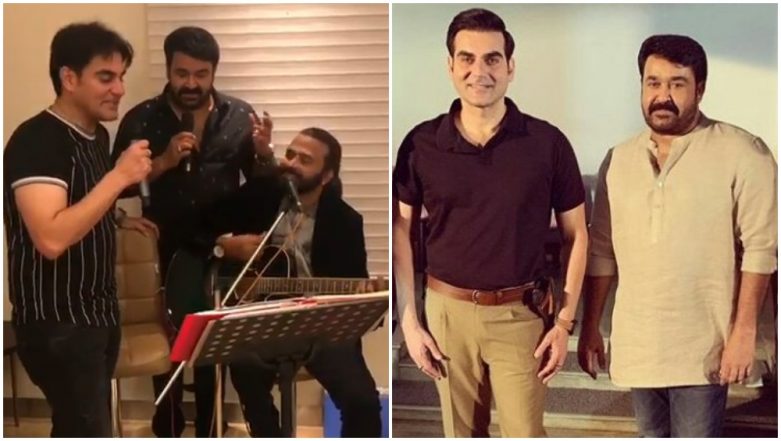 In May it was confirmed that Salman Khan’s brother Arbaaz Khan is going to make his debut in the Malayalam film industry and that too with Mohanlal, in the upcoming flick Big Brother. While everyone is eagerly waiting to catch a glimpse of the two and their characters, here’s a treat for all fans of Arbaaz and Lalettan (as Mohanlal is fondly called). On August 4 Arbaaz Khan celebrated his 52nd birthday. It was a low-key affair but extremely special. Arbaaz has shared videos from the fun evening in which the two were seen crooning to classic Hindi songs. Salman Khan’s Brother Arbaaz Signs His First Malayalam Film With Mohanlal.

It comes as a surprise to all fans of Mollywood superstar Mohanlal to see him singing to some of the popular Bollywood songs. "Yeh Dosti", "Dard-e-Dil", "Chura Liya Hai Tumne Jo Dilko" were some of the songs to which the duo sung together. If you haven’t watched those fun Karaoke sessions yet, take a look at them now, Arbaaz Khan has shared those videos on Instagram. Big Brother: Mohanlal to Romance Ek Ladki Ko Dekha Toh Aisa Laga Actress Regina Cassandra in the Siddique Entertainer.

About Arbaaz Khan’s debut in Malayalam cinema Siddique told TOI, “I have known Arbaaz since I had worked with his brother in Bollywood. We have kept in touch since and when I discussed the idea of the character with him, he was happy to come onboard as it will give him a chance to work in the South film industry and share screen space with Mohanlal.” Arbaaz would be seen essaying the role of a cop in this film. Keep watching this space for further updates!