Kim Ji Soo Ousted From ‘River Where the Moon Rises’ After Sexual Assault Allegations; Na In Woo in Talks To Replace Him

South Korean actor Kim Ji Soo who was accused of sexual assault and school violence by a former classmate has faced the repercussions of his act. As the star has been removed from his show River Where The Moon Rises. And with this, the makers are considering Na In Woo as the new face for the show. Read on. 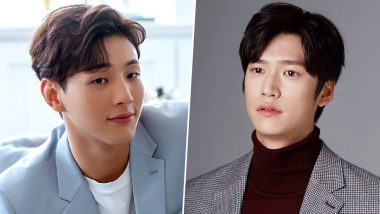 South Korean actor Kim Ji Soo who was accused of sexual assault and school violence by a former classmate has faced the repercussions of his act. As the star has been removed from his show River Where The Moon Rises. Kim played the lead role in the series, but owing to the heinous allegations against him, the makers decided to look for someone else as the protagonist. KBS made an announcement with a statement that read that as Ji Soo has "become the centre of controversy" he will be "stepping down" from the k-drama. Kim Ji Soo Faces Twin Charges of Sexual Assault & School Violence, Fans Express Disappointment on Twitter Following Allegations on the South Korean Actor.

That's not it, as a close source from the Cube Entertainment agency told News1 that Na In Woo who appears as the lead actor in Mr. Queen is getting proposals to be the new face of River Where The Moon Rises. That means, if all things go well, then Na In Woo might replace Kim Ji Soo. Well, we bet if this happens fans of the actor would be the happiest. Kim Ji Soo Accused of Sexual Assault After Filming Himself Having Sex in a School Bathroom; South Korean Actor Posts Handwritten Apology.

Talking about, Ji Soo controversy, he was accused by an unknown user on social media of school violence and bullying. This also led to many coming out and levelling sexual assault allegations on Ji. Due to this, the actor had also taken to his Instagram handle on March 4 and apologised for his past wrongdoings. He had also said sorry to the cast and crews of River Where the Moon Rises.

(The above story first appeared on LatestLY on Mar 05, 2021 06:56 PM IST. For more news and updates on politics, world, sports, entertainment and lifestyle, log on to our website latestly.com).