Hometown Cha-Cha-cha's Kim Seon-ho finds himself in a controversy. We look into five such shocking controveries kdrama actors found themselves in 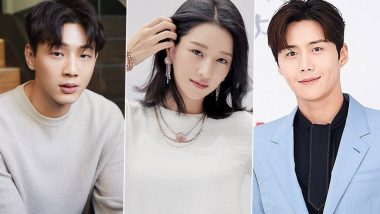 In a shocking turn of events, the lead actor of the recently concluded Kdrama series Hometown Cha-Cha-Cha, Kim Seon-ho found himself in the midst of a controversy last Sunday. A social media post surfaced of a woman claiming to be the actor's ex-girlfriend, accusing him of urging her to abort the child. While she didn't mention the name and termed him as actor K, a YouTuber Lee Jin-ho identified him to be Kim Seon-ho. Since then there has been a lot of chatter about the same with many demanding a clarification from the actor's agency. Seon-ho's agency Salt Entertainment issued a statement asking people to be patient till they investigate the basis of all the accusations. Not Only 'Squid Game,' but 'Hometown Cha-Cha-Cha' Goes Global Hit

Now this isn't the first time that a rising and popular Kdrama actor has been embroiled in a controversy. In the last couple of months, there have been quite a few and today, we will talk about five of them.

Soo Ye-Ji is not new to these controversies as many had earlier accused her of school bullying. Why this particular incident caught much attention was because it was about Ye-Ji allegedly controlling and manipulating Kim Jung-hyun, when they were dating. Dispatch revealed that Ye-Ji had instructed Kim not to film intimate scenes for his 2018 Kdrama series Time. Things got more evident when Kim behaved oddly with his female co-star during the press conference of Time and was slammed for it. Soo Ye-Ji's agency called it ' personal immature feelings in a romantic relationship' while Kim apologised for his behaviour on Instagram. But it did have repercussions as many brands distanced themselves from the actress and she was even ousted from the drama Island.

Ji-Soo was replaced mid-way into the drama River When The Moon Rises after school bullying and sexual harassment allegations surfaced. He posted a handwritten apology on Instagram saying, " I sincerely apologize to the people who suffered because of me. There is no excuse for my past misconduct. They were things that cannot be forgiven." Later, his agency confirmed that he would enlist in military service this October. Kim Ji Soo Faces Twin Charges of Sexual Assault & School Violence, Fans Express Disappointment on Twitter Following Allegations on the South Korean Actor

They had a highly public and a very ugly divorce with both sides hurling accusations at each other. They lost out on brand endorsements and Hye-Sun was outed from a variety show.

Yunho, which was till recently was known to have a squeaky clean image, found himself in a spot when he was accused of violating COVID norms and indulging in illegal activities. He published two apologies on Instagram but not everyone was pleased.

Park Hye-soo's new show Dear M was about to air on KBS when suddenly an alleged school bullying scandal broke out. She denied it claiming she was the victim and not the perpetrator but more victims came out with their stories. The series is yet to be aired.

(The above story first appeared on LatestLY on Oct 19, 2021 08:00 PM IST. For more news and updates on politics, world, sports, entertainment and lifestyle, log on to our website latestly.com).