When The Tonight Show's host Jimmy Fallon asked Priyanka Chopra Jonas if she could throw some light on the 'Daddy's Little Girl' tattoo visible on her arm in the cover photo of her memoir, Unfinished, PeeCee shared a moving story. Watch! 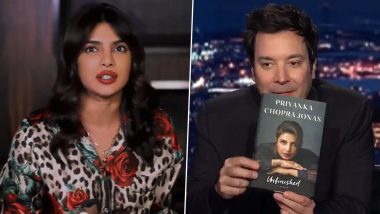 Bollywood's desi girl Priyanka Chopra Jonas has been slaying it with her acting since quite a long time. Be it Hindi cinema or making her presence felt in the global space, she's truly an inspiration. Currently, she is busy promoting her memoir Unfinished. And for the same, she recently appeared on The Tonight Show starring Jimmy Fallon. During her interaction with the host, the actress revealed how she penned the 256-pages book amid the pandemic. But when Jimmy asked her if she could throw some light on the tattoo visible on her arm in the cover photo of the novel, PeeCee shared a moving story. Priyanka Chopra Jonas Reveals in ‘Unfinished’ That She Once Hid Her High-School Boyfriend in the Closet but Got Caught!

Priyanka said, "I was very close to my father. He was my greatest champion, my biggest cheerleader, like the loudest guy in the room. If I'd win an award, he'd be like, ''Ahhh!!'' and I had to tell him, ''Dad, you gotta play it cool now. But dad didn't know how to, he was just so excited about everything that I did." "And when he died, it was just quiet in that corner, in that corner of cheer. Even though I have a very supportive family, but they weren't all as rambunctious as him," she added. BAFTA Awards 2021: Priyanka Chopra Jonas Competes With Other Nominees to Secure a Nomination for Best Supporting Actress for The White Tiger, Sister Parineeti Chopra Cheers!

“I was very close to my father. He was my greatest champion, my biggest cheerleader, the loudest guy in the room.” @PriyankaChopra remembers her late father as she tells Jimmy about the meaning behind her tattoo ❤️ #FallonTonight pic.twitter.com/BP2hU4BF7y

Ahead, pointing at her 'Daddy's Little Girl' tattoo, she said, "And this tattoo, I got it about a year or two before my dad passed, and I lied to him and I told him I needed him to write this down because I wanted it for artwork for my album. But he wrote it in his handwriting, and it's my first tattoo and, you know, now I have it here with me." Priyanka Chopra Shares Update on the Release of Her Memoir Unfinished, Says 'Can't-Wait for First Copy Next Month' (View Post).

For the one's who don't know, Priyanka was very close to her father, as he always supported her in any decisions she took in her life. Dr Ashok Chopra died on June 10, 2013. He was suffering from cancer since 2008. Stay tuned!

(The above story first appeared on LatestLY on Feb 10, 2021 03:14 PM IST. For more news and updates on politics, world, sports, entertainment and lifestyle, log on to our website latestly.com).