Priyanka Chopra Jonas is making the right kind of noise on the internet. This time, it's not because of her film, but it is due to her already out memoir, Unfinished. And here are some rare photos of the actress with Nick Jonas from the book. Have a look! 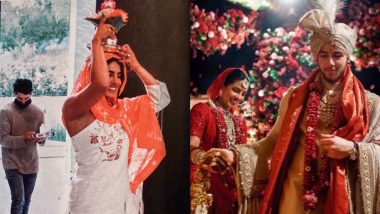 Priyanka Chopra Jonas is making the right kind of noise on the internet. This time, it's not because of her film, but it is due to her already out memoir, Unfinished. The global icon has been garnering praises for her novel and many anecdotes and life secrets of the actress are out. Right from how she hid her boyfriend when she was in the class tenth to even the behind story about her tattoo 'Daddy's Li'l Girl', she's all over the news. However, now we've got our hands on some of the unseen pics of NickYanka that are featured inside the memoir. Priyanka Chopra Jonas Reveals in ‘Unfinished’ That She Once Hid Her High-School Boyfriend in the Closet but Got Caught!

A Twitter page called 'Daily Nick Jonas' has shared some pictures from the book and it sees many moments of the couple. Right from the duo at an island hours after their engagement to Priyanka's griha pravesh ceremony at their Los Angeles home, the photos will make you go aww. In the griha pravesh pic, the actress can be seen carrying a steel pot on her head and is followed by her hubby dearest. Priyanka Chopra Jonas' Memoir, Unfinished Becomes the Best Seller in the US in Less Than 12 Hours.

📸|| Some pics of Nick and Priyanka from her new book! pic.twitter.com/QzukPkW1MC

The content below the photo reads, "Moving into our new house during quarantine was unusual but we made the best of it, including a Griha Pravesh (house warming) ceremony."

FYI, Priyanka and Nick together are couple goals. Fans, as well as celebs, love their equation as it's not something that can be described. The Hollywood and Bollywood star got married in December 2018 in Jodhpur and are living happily ever after. Stay tuned!

(The above story first appeared on LatestLY on Feb 11, 2021 08:04 PM IST. For more news and updates on politics, world, sports, entertainment and lifestyle, log on to our website latestly.com).