Queen: Ramya Krishnan to Play the Role of Late CM Jayalalithaa in Her Digital Debut; Trailer to Be Out on December 5

We all are well-versed that Kangana Ranaut is going to play the role of Jayalalithaa in the upcoming biopic, Thalaivi. Besides a movie, there is a web-series also been released based on the life and political journey of Jayalalithaa. The upcoming web-series is called as Queen. The titular role will be played by Baahubali fame Ramya Krishnan. 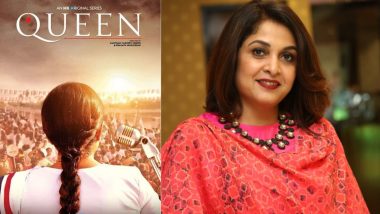 It was not that long ago when the first look of Kangana Ranaut as the last late Chief Minister J Jayalalithaa was released. We all are well-versed that she is going to play the role of Jayalalithaa in the upcoming biopic, Thalaivi, helmed by AL Vijay. Besides a movie, there is a web-series also been released based on the life and political journey of Jayalalithaa. The upcoming web-series is called as Queen. The titular role will be played by Baahubali fame Ramya Krishnan, which also marks her digital debut. Kangana Ranaut’s Thalaivi in Legal Mess, Madras HC Gives Jayalalithaa’s Niece, Deepa, Permission to Sue the Makers.

The teaser of the upcoming web-series Queen was shared by MX Player, the streaming platform on which the show would also be premiered. Although it did not reveal Ramya Krishnan’s look, but it did drop hints about her journey from being a simple girl to a heroine and then as the state’s youngest chief minister. The teaser did look intriguing, and we cannot wait to see Ramya Krishnan’s avatar. The trailer of Queen will dropped online on December 5. The Family Man Season 2: South Beauty Samantha Akkineni to Make Her Digital Debut with Manoj Bajpayee Starrer.

Watch The Teaser Of Queen Below:

The first season of Queen is reportedly said to have 11 episodes. In an interview to BT, while talking about her digital debut, Ramya Krishnan was quoted as saying, “The audience has always accepted me with an open heart, be it in films or on TV. But today, entertainment is no longer restricted to either screens. Content is the king, and I hope that viewers will like my next project, Queen. I think one must continue to grow with technology and I am looking forward to exploring the digital world. The depth of this character and the coming together of a stellar crew and an engaging storyline compelled me to say ‘yes’.” We are sure, each one of you must be excited to see Ramya Krishnan in the digital space!

(The above story first appeared on LatestLY on Dec 03, 2019 08:04 AM IST. For more news and updates on politics, world, sports, entertainment and lifestyle, log on to our website latestly.com).