Shovana Narayan Relives Her Best Moments With Pandit Birju Maharaj, Says ‘I’ll Never Forget How He Brought Me On Stage’

Narayan concluded on a personal note of hope: "He may have left us physically, but he's always speaking through my work, through my thoughts, through my approach to everything. He's still there with me as a person." 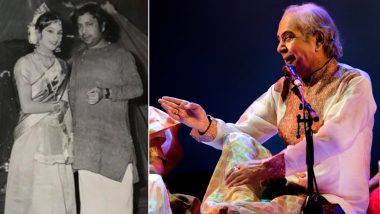 Kathak exponent and retired bureaucrat Shovana Narayan met Pandit Birju Maharaj, her guru, just a week ago and she'll carry that memory with her forever. "We sat down and we started laughing," Narayan recalled in a conversation with IANS. "We were holding each other's arms and hugging each other very lightly. He asked me, 'Does you son remember me?'" Pandit Birju Maharaj Dies at 83: Madhuri Dixit, Hema Malini, Anupam Kher and Other Celebs Mourn the Demise of the Legendary Kathak Dancer.

She then explained why the maestro asked her this question. "Actually, when my son was very young, he told Maharaj ji to his face that he would not learn dancing as it was meant for girls only and did not suit men. Maharaj ji used to laugh whenever he remembered this incident." Pandit Birju Maharaj Dies at 83: From Kaahe Chhed Mohe to Mohe Rang Do Laal, Bollywood Dance Sequences Choreographed by the Legend That Will Forever Remain Iconic.

Going down memory lane, the Padma Shri awardee recalled her long association with Maharaj ji, who passed away at the age of 83 late on Sunday night. He said: "I started learning from him when I was barely 13 or 14 years old in the year 1964. He was an amazing person and an amazing guru.

"I can never forget how he used to come every single day for years and years and years, for more than eight years. Every day in the evening, he would come at about 7 or 7:30 p.m. He used to come in his blue-coloured Ambassador and would be there teaching me for three, four hours every single day. When I had my school or college holiday, he would come in the morning at and I would be dancing till 5:30 p.m."

Narayan, who read Physics in college but opted to become an IAS officer, will always remember Maharaj ji as the archetypal guru, always around to help her with her finishing touches and taking care of every detail. "And then I'll never forget how he brought me on stage and introduced me to the audience himself. Before his performance, he said, 'Here is she', and that's how I came to the notice of professionals. My guru was indeed my launch pad," Narayan said.

Talking about Maharaj ji's everlasting contributions to the dance form, Narayan told IANS: "He overhauled the entire scenario of Kathak. He was so traditional, yet he moved with the times. It was amazing to see how he introduced a new dimension without losing the essence and the classic reality of the tradition that he had grown up with. I would say that he gave a new aura, a new garb, a new visibility, both nationally and internationally, to Kathak and he created so many institutions." Narayan concluded on a personal note of hope: "He may have left us physically, but he's always speaking through my work, through my thoughts, through my approach to everything. He's still there with me as a person."

(The above story first appeared on LatestLY on Jan 17, 2022 03:41 PM IST. For more news and updates on politics, world, sports, entertainment and lifestyle, log on to our website latestly.com).