Pandit Birju Maharaj 82nd Birth Anniversary: 9 Fascinating Facts About the Legendary Kathak Dancer You May Not Have Known

It is the 82nd birth anniversary of the legendary Kathak dancer Pandit Brijmohan Nath Mishra Maharaj this year, on February 4. If you are looking for more information about Pandit Birju Maharaj on his 82nd birthday, this year, then you have arrived at the right article as you can find them all here. 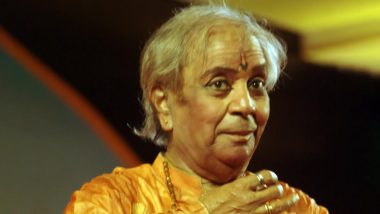 It is the 82nd birth anniversary of the legendary Kathak dancer Pandit Brijmohan Nath Mishra Maharaj this year, on February 4 (Tuesday). Popularly known as Pandit Birju Maharaj, he is considered to be one of the finest classical dancers, not just in India but around the world. Birju Maharaj said to be an exponent of Kalka-Bindadin Gharana of Kathak dance form. If you are looking for more information about Pandit Birju Maharaj on his 82nd birthday, this year, then you have arrived at the right article as you can find them all here. On his birth anniversary, here we bring you nine fascinating facts about the dancer, you probably did not know. 5 Unique Musical Instruments Used in India.

Birju Maharaj was born on February 4, 1937, in Lucknow, in the family of another famous Kathak exponent, i.e. Jagannath Maharaj, also known as Acchan Maharaj. As the notable personality celebrates his 82nd birthday this year, we at LatestLY bring some of the lesser-known things about the legendary classical dancer Pandit Birju Maharaj.

1. Not many people know that Birju Maharaj was taught by his father Acchan Maharaj, and his two uncles Lachhu Maharaj and Shambhu Maharaj.

2. You will be surprised to know Birju Maharaj gave his first stage performance at the age of seven. The rest they say is history.

3. If that didn’t delight you, this might. Birju Maharaj started teaching the dance form at an early age of 13. He taught at the Sangeet Bharti in New Delhi.

5. It is a little known fact despite dancing being the first love of Birju Maharaj, he has a keen interest in Hindustani classical music and is a notable vocalist as well. He donned many hats in his career, viz. dancer, composer, singer etc.

6. Speaking about Birju Maharaj’s singing skills, his tight grip over Thumri, Dadra, Bhajan, and Ghazals is beyond amazing.

7. Pandit Birju Maharaj is a well-known film personality too. He has worked in ‘Shatranj Ke Khiladi’, Devdas, Dedh Ishqiya, Umrao Jaan, Vishwaroopam, and Bajirao Mastani among others.

8. Not many people know that Birju Maharaj has a great zeal for cars. He once said that had his dance skills went unnoticed; he would have been a mechanic today.

9. Another lesser-known fact about Pandit Birju Maharaj is that he loves watching Hollywood flicks. His top two actors in that industry are Jackie Chan and Sylvester Stallone.

Known to be one of the best Kathak dancers in the country and the world alike, Pandit Birju Maharaj is a revered figure worldwide in the field of arts, dance, and music. As the celebratory dancer will observe his 82nd birthday this year, we at LatestLY wish him a very ‘Happy Birthday’, and hope he remains in the pink of his health.

(The above story first appeared on LatestLY on Feb 04, 2020 10:42 AM IST. For more news and updates on politics, world, sports, entertainment and lifestyle, log on to our website latestly.com).