The location catalogue titled '100 film shooting destination in Sikkim' was also showcased to the media, which was earlier launched by the chief minister of Sikkim. For submissions of the movie interested parties may log in to www.sikkimfilmboard.org till November 15. 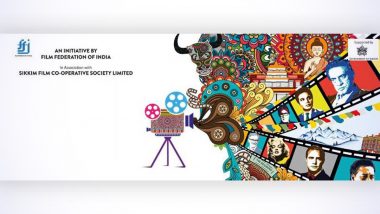 Besides movie screenings and participation from filmmakers from around the world, the festival will also be a platform for a producers and investors meet, a fashion show, a cultural exhibition, art performances and recce, the chairperson told reporters in a Sikkim Global Film Festival press conference held at the Old Sikkim House here. The event was also attended by Birendra Tamling, Advisor Information and Public Relations Department. Pooja Sharma said the entries are open in five categories -- Feature Film Screening, Tribal and Regional Film competition, Short Film Competition, 1 Minute video competition - theme: Global peace, and 5 Minute video competition - battling the pandemic. Emmys 2021: Rita Wilson Shines Bright in Her Glittery Black Outfit at the Awards Show.

For submissions of the movie interested parties may log in to www.sikkimfilmboard.org till November 15. All films entering the competitive categories must carry English subtitles. Films not certified by the Central Board of Film Certification (CBFC) can also be submitted and the run time of short films should not exceed 30 minutes. To encourage the filmmakers to make films in the state, the Prem Singh Tamang-led Sikkim government, would provide a subsidy of Rs 20 lakhs in cash and kind to the local filmmakers and a subsidy of Rs 1 crore in cash and kind would be given to the national film makers, added the chairperson.

Pooja Sharma also stated that the subsidy would be given only if the filmmakers fulfill the criteria i.e. 75 per cent of the shooting should be done in Sikkim and 50 per cent of cast and crew should be locals. The location catalogue titled '100 film shooting destination in Sikkim' was also showcased to the media, which was earlier launched by the chief minister of Sikkim.