American singer-actor Demi Lovato recently opened up about her sexual identity, confirming that she identifies as pansexual. According to Variety, on an episode of Joe Rogan's podcast that delivered on Saturday, the Sonny With a Chance entertainer talked about her sexuality 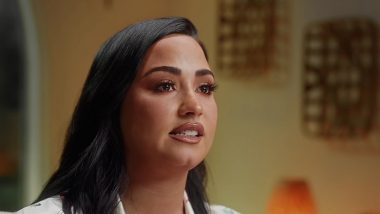 American singer-actor Demi Lovato recently opened up about her sexual identity, confirming that she identifies as pansexual. According to Variety, on an episode of Joe Rogan's podcast that delivered on Saturday, the 'Sonny With a Chance' entertainer talked about her sexuality while clarifying that she is keen on adopting children one day. "I also don't know if I'm going to end up with a guy, so I can't really see myself getting pregnant. Demi Lovato Opens Up About Her Future Plans To Start a Family.

I don't know. I'm so fluid now, and part of the reason why I am so fluid is because I was like super closeted off," Lovato said. Rogan at that point asked, "You mean like sexually fluid? You like girls, you like boys?" Lovato answered, "Yeah, anything really." "What do they call that, pansexual or something to that effect?" Rogan inquired. Demi Lovato Says Her Engagement With Max Ehrich Gave Her False Sense of Security.

"Yeah, pansexual," Lovato replied, confirming how she identifies. Lovato continued, establishing herself as part of the LGBTQ+ community. "I heard somebody consider the LGBTQIA+ people group alphabet mafia and I was like, that's it, that's what I'm going with," Lovato said. She at that point opened up further about experiencing childhood in Texas and feeling disgraceful about her sexual identity. Lovato said that she encountered a sexual awakening while at the same time watching the kissing scene between Sarah Michelle Gellar and Selma Blair in 'Cruel Intentions,' however "felt a ton of disgrace" about it.

"I was like, 'Oh, I like that,' " Lovato said. "But I felt a lot of shame because growing up in Texas as a Christian, that's very frowned upon. Any attraction I had to a female at a young age, I shut it down before I even let myself process what I was feeling," she added. As reported by Variety, the 'Stone Cold' singer was recently engaged to Max Ehrich, however, it was uncovered in the March issue of Glamour that she currently feels "too queer" to be with a cis man.

The songstress also recently revealed that her first album since 2017, 'Dancing With the Devil... The Art of Starting Over' releases on April 2. The album includes features with Ariana Grande, Saweetie, and Noah Cyrus.