Anil Murali Passes Away at 56, Prithviraj Sukumaran Mourns the Demise of the Popular Malayalam Actor 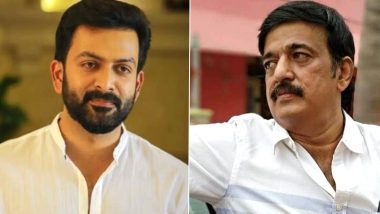 Anil Murali, who was widely known for his works in the Malayalam film and television industry, breathed his last on July 30. The Mollywood actor was admitted at the Aster Medcity Hospital in Kochi, Kerala, on July 22. He was reportedly suffering from liver-related ailments. Actor-director Prithviraj Sukumaran shared a pic of the 56-year-old actor on Twitter and offered condolences. Raavi Kondala Rao, Veteran Telugu Actor, Dies Of Cardiac Arrest At 88.

Anil Murali gained popularity in the world of cinema after doing some popular TV shows. He was majorly known to play the role of a baddie in films. Born in Thiruvananthapuram to Muraleedharan Nair and Sreekumariamma, Anil Murali had made his debut in Malayalam Cinema in 1993 with the film Kanyakumariyil Oru Kavitha. Anil who has appeared in more than 200 films has shared screen space with some of the popular actors in the industry and that includes Mammootty, Mohanlal, Nedumudi Venu, Jagathy Sreekumar, Biju Menon, Prithviraj Sukumaran, Suresh Gopi, Dileep, among others. Kumkum, Veteran Actress of Mr X in Bombay Fame, Dies at 86; Actor Nasirr Khan Confirms Her Demise.

Anil Murali was last seen in Tovino Thomas starrer Forensic in which he played the character Kurian. The yet-to-be-released Malayalam movie Professor Dinkan, starring Dileep and Namitha Pramod in the lead, is his last film. Anil Murali is survived by his wife Suma and two children, Adithya and Arundathi. May his soul rest in peace.

(The above story first appeared on LatestLY on Jul 30, 2020 01:39 PM IST. For more news and updates on politics, world, sports, entertainment and lifestyle, log on to our website latestly.com).