Veteran actress Kumkum passes away at the age of 86. Nasirr Khan pays her a tribute by picking two of his favourite movies of her with his father Johnny Walker. 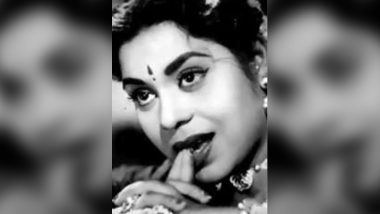 Kumkum, the veteran actress from the 60s, is no more. She was 86. Johnny Walker's son Nasirr Khan revealed that on Twitter. Speaking about it, he wrote, "Yesteryear's film actress KUMKUM aunty, passed away, she was 86. she did so many films; songs & dances were picturized on her. did so many movies opposite dad #johnnywalker." Where do you remember her from? The hit haunting Kishore Kumar song Mere mehboob qayamat hogi from Mr X In Bombay had the actress looking disturbed by his voice.

Kumkum is best known for her roles in Mother India, Kohinoor, Ujala, Kuwari and many more. She was discovered by none other than Guru Dutt. As per reports, he was looking to cast Jagdeep, who recently left us bereaved, in the song Kabhi aar kabhi paar in Aar Paar (1954), but later decided to go with a female lead and she was Kumkum.

yesteryear's film actress KUMKUM aunty, passed away, she was 86. she did so many films; songs & dances where picturized on her. did so many movies opposite dad #johnnywalker pic.twitter.com/Me63j4pd1Z

she was the female in the immortal "ye hai bombay mer jaan" song with him.

may Allah grant her Jannah.

deepest condolences to the family.

May her soul rest in peace. We will fondly remember her from the countless memorable songs and dearly miss her.

(The above story first appeared on LatestLY on Jul 28, 2020 02:06 PM IST. For more news and updates on politics, world, sports, entertainment and lifestyle, log on to our website latestly.com).