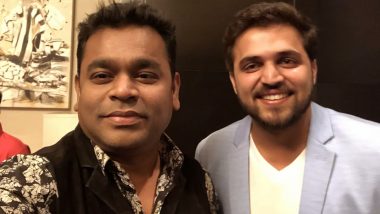 "Thumbi thullal", AR Rahman's new track for Tamil superstar Vikram's upcoming film "Cobra", has become a rage in a short time since its launch, and basking in its glory is new-age playback singer Nakul Abhyankar. Chennai-based Nakul, who has worked with Rahman on films like "Sarkar" and "Nawab", says the music maestro explores new things and encourages young talent "Working for Rahman sir was always my dream, right from childhood! I can't thank God enough for turning my dream into reality. Every moment is special to me when I am with him in the studio. He is extremely supportive of youngsters and keeps exploring new things. His studio is like a factory of innovations. Every day we get to learn something new. He is a great inspiration and a very humble person," Nakul told IANS. AR Rahman Raises Voice Against Child Abuse, Says ‘Let This Not Be the Silent Pandemic’ (Watch Video)

"I think the best quality in him is that he gives us full freedom to explore our creativity. He doesn't let down anyone's ideas. In fact, we sometimes take our own songs to him and ask for his guidance and he gives us some tips on how to improve on the composition or the production. To be honest, I haven't seen anyone like him. He is a genius, a great human being and a wonderful teacher," he added. Nakul has recordedthe song with Shreya Ghoshal. "'Thumbi Thullal' is a wedding song. It is filled with a lot of happiness and romance. This song is pure A.R Rahman magic. I am really fortunate to have sung alongside Shreya Ghoshal. It is my first ever duet with her and this makes the song very special to me," he said. Indian Idol 6 Contestant Poorvi Koutish on Working with AR Rahman for ‘99 Songs’: ‘Its a Lifetime Experience’

It started with Nakul singing a scratch voice track. "Sir also gave me the opportunity to record Shreya ji for this track. I think that was my first ever interaction with her. Once the recording was done, she asked me 'Who has sung the male portion?' I said that it was my voice and then she said 'You sound really good! Your voice sounds very fresh. Hope your voice gets retained. All the best!' These words gave me a lot of happiness and confidence and an assurance that I am on the right path. Basically, it had made my day. Thankfully, sir also liked my rendition. I also ended up doing some of the vocal arrangements along with Arjun Chandy," said Nakul, about the song that was recorded before the lockdown.

(The above story first appeared on LatestLY on Jul 01, 2020 12:50 PM IST. For more news and updates on politics, world, sports, entertainment and lifestyle, log on to our website latestly.com).