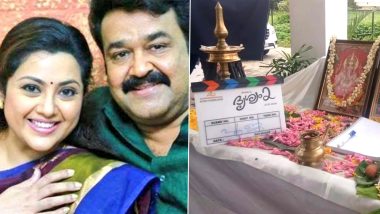 Drishyam 2, the sequel to the 2013 Malayalam film Drishyam, is one of the most-anticipated projects of Mohanlal and Meena. On the occasion of Lalettan’s birthday, the makers had announced about this sequel and recently when Meena turned a year older, her co-star made it official that she would be seen in Drishyam 2. Since a long time many have been waiting to know when the shooting of the film would begin, considering the ongoing coronavirus pandemic situation. The shooting of Drishyam 2 has gone on floors today and a few pictures from the puja ceremony are doing rounds on the internet. Drishyam 2: Mohanlal Welcomes Meena on the Sets of Jeethu Joseph’s Film on the Occasion of Her Birthday!

Drishyam 2 is helmed by Jeethu Joseph, the director who had also helmed the 2013 film. While speaking to students at the Additional Skill Acquisition, the filmmaker had shared that the sequel is set seven years later from where the first part ended. In an interview to The Hindu, talking about this upcoming sequel, Jeethu Joseph had shared, “It is about how the family responds to the life after the crisis.” He further mentioned, “The police hadn’t closed the murder investigation. So the film will examine how the family deals with their own personal trauma and reactions from the society.” Drishyam 2 Confirmed Ahead Of Superstar Mohanlal’s 60th Birthday!

#Drishyam2 shoot started today at Ernakulam, will be shifted to Georgekutty's own Thodupuzha after 2 weeks..!! #Lalettan will join the sets on September 25th..!!#Mohanlal @Mohanlal pic.twitter.com/4wu87mawf4

Talking about the shooting of the film, Jeethu Joseph had revealed to the daily that once the Kerala Government gives clearance, they will begin with the shoot. The director had also shared that he is in no hurry to release Drishyam 2 and would wait for the cinema halls to reopen that has been shut ever since the lockdown was imposed in the wake of coronavirus pandemic.

(The above story first appeared on LatestLY on Sep 21, 2020 10:58 AM IST. For more news and updates on politics, world, sports, entertainment and lifestyle, log on to our website latestly.com).